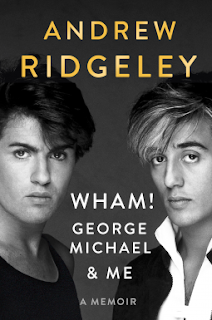 In 1975 Andrew took a shy new boy at school under his wing. They instantly hit it off, and their boyhood escapades at Bushy Meads School built a bond that was never broken. The duo found themselves riding an astonishing roller coaster of success, taking them all over the world. They made and broke iconic records, they were treated like gods, but they stayed true to their friendship and ultimately to themselves. It was a party that seemed as if it would never end. And then it did, in front of tens of thousands of tearful fans at Wembley Stadium in 1986.

Andrew Ridgeley—one half of one of the most famous bands in the world—tells the inside story of Wham!, his lifelong friendship with George Michael, and the formation of a band that changed the shape of the music scene in the early eighties. Andrew’s memoir covers in wonderful detail those years, up until that last iconic concert: the scrapes, the laughs, the relationships, the good, and the bad. It’s a unique and one-and-only time to remember that era, that band, and those boys.

After I read George Michael: A Life which is coming out in a few short weeks, I felt like I wanted to know a bit more about the Wham! era. Where better to go than Andrew Ridgeley's own autobiography from 2019. This is a much more intimate look at the friendship between two school mates who took a rollercoaster ride of fame and music together.

This is clearly told from a place of kinship and care. It warms my heart that Andrew still often refers to his friend as "Yog", the nickname he had for George when they first became friends. I smiled at the story of two young teens talking their way into a showing of Saturday Night Fever; a story I can relate to in that I too was underaged when I saw the R-rated version of the film in theatres on its initial run. That the film and music had an impact on them just as it did myself really allowed me to connect to the group in a way I had not before.

I also liked that, in chapter 13, Andrew is very candid about two things: their expectations of Wham!'s longevity and his role in the group's creative process. Knowing his views on both of these gives me even greater appreciation for what the group did, what his contributions were, and how it all played out over a very short period of time.

The book is full of many photos - black and white, color, personal, professional - that show the bond between Andrew and George. Clearly many of these came from Andrew's own photo albums as this was long before the days of digital photography. That further makes this account of their time together even more special.

As a member of the Sirius XM (Volume - Channel 105) Volumemaniacs' Book Club on Facebook, I am looking forward to our discussion of Wham! George Michael and Me for our July meeting.

Posted by Martin Maenza at 2:04 PM