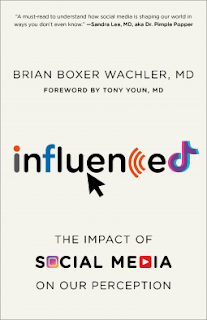 Individuals seeking to widen their tribes of friends, fans, and followers have an abundance of resources for building their digital footprints and social media popularity. All of this seems well and good from the perspective of revenue, exposure, and perhaps ego-building, but what is the impact of this on the human brain and our behavior? Is anyone paying attention to the lurking side effects of the social media influencer revolution?

As “Dr. Brian” Boxer Wachler—one of the world’s most esteemed authorities on human perception—reveals in Influenced: The Impact of Social Media on Our Perception, we are oblivious to the mental evolution that is already in process. Science is proving that our addictive reliance upon social media and its influencers is having a demonstrable impact on how we think, feel, and perceive everything around us— and even how we react to stimuli. One might think that a “Like” is nothing more than a split-second tap on a device. However, brain scans tell a different story. Our brains literally light up with every buzz, ding, alert, and ring in anticipation of how our network is responding to us. As we tap away at our devices, we anxiously seek the approval of others—often people we don’t know.

Influenced unpacks what happens to our brains and our behaviors each time we click “Like”; follow an influencer; consume a video; share or reshare an article; post or repost a photograph; write a comment; pile on a trend;; just scroll for new content; and why do we keep coming back for more. Dr. Boxer Wachler includes his own social and medical findings and highlights them with interviews with top influencers, the latest studies, and pop-culture anecdotes.

This look into the effects of social media on individuals will be published on October 29, 2022. Rowman and Littlefield provided me an early galley in exchange for an honest review.

What attracted me to this particular book was the topic itself. I have been on social media for quite a long time (as a blogger since 2007, on Facebook since 2009, and on Twitter since 2010), sharing my thoughts and views on a variety of subjects. While it is not an overwhelming part of my life, it has had its moments where I was very dedicated to it. As such, I was very curious to see what insights on this activity that Dr. Wachler could shed light on. As it turns out, there is a variety of useful information within these pages.

I liked how Wachler approached his discussion, breaking things into their logical components and building upon them. His approach is not one that is overly scholarly or stuffy. He describes things in everyday terms with an eye towards educating and informing. He also gives a very balanced view on things - equally covering both the negatives and the positives of this medium.

And, if I may, a word or two about the cover: I think it is very effective. The plain white background with black lettering, the latter supplemented with the use of familiar social media logo elements, is attractive in its simplicity. It will pop on the shelf, enticing the casual browser to check it out.

I think Influenced will be beneficial to both those who are firmly entrenched into social media and those who have zero experience with it as well. In fact, the latter group might definitely benefit from it as they can discover how powerful this medium has come in a very short time.

Posted by Martin Maenza at 7:18 AM