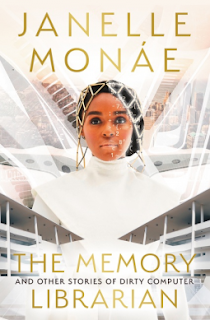 Whoever controls our memories controls the future.

Janelle Monáe and an incredible array of talented collaborating creators have written a collection of tales comprising the bold vision and powerful themes that have made Monáe such a compelling and celebrated storyteller. Dirty Computer introduced a world in which thoughts—as a means of self-conception—could be controlled or erased by a select few. And whether human, A.I., or other, your life and sentience was dictated by those who’d convinced themselves they had the right to decide your fate.

That was until Jane 57821 decided to remember and break free.

In The Memory Librarian: And Other Stories of Dirty Computer, singer-songwriter, actor, fashion icon, activist, and worldwide superstar Janelle Monáe brings to the written page the Afrofuturistic world of one of her critically acclaimed albums - 2018's The Dirty Computer, exploring how different threads of liberation—queerness, race, gender plurality, and love—become tangled with future possibilities of memory and time in such a totalitarian landscape…and what the costs might be when trying to unravel and weave them into freedoms.

I discovered Monáe while watching the Grammy Awards one year. Her live performance of Tightrope instantly wowed me; I knew this was a talent who would do great things. Turns out, she can sing, dance, write music, act and now write fiction. Along with five other co-writers (Yahanca Delgado, Eve L. Ewing, Alaya Dawn Johnson, Danny Lore, and Sheree Renee Thomas), she crafted five short stories set in the world from which a number of her albums draw their inspiration.

A tricky thing with short story anthologies such as this one is that they have to a) fit well within the shared world in which they inhabit and b) they have to each be engaging without overlapping one another too much. The five stories sort-of hit both those marks. I would have liked a bit more worldbuilding explained - that will help those not already initiated into the music and albums. I also would have liked to see a bit more variety in the themes of each tale; they seem to all have lead characters with similar traits, gender identities, and motivations.

Given my love of music, I am definitely open to seeing more from this world and other similar types of collections inspired by other musicians. I think it is a great crossover market that is ripe for the right creators to utilize.