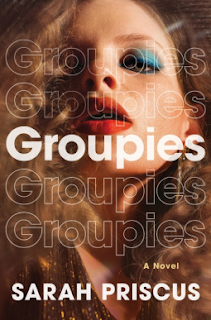 It’s 1977, and Faun Novak is in love with rock ‘n’ roll. After her mother’s death, Faun, a naïve college dropout, grabs her Polaroid and hops a Greyhound to Los Angeles. There she reconnects with her charismatic childhood friend Josie, now an up-and-coming model and muse. To make their reunion even sweeter, Josie is now dating Cal Holiday, the frontman of the superstar rock band Holiday Sun, and Faun is positively mesmerized.

Except it’s not just the band she can’t get enough of. It’s also the proud groupies who support them in myriad ways. Among the groupies are: a doting high school girl at war with her mother; a drug-dealing wife and new mom who longs to be a star herself; and a cynical mover-and-shaker with a soft spot for Holiday Sun’s bassist.

Faun obsessively photographs every aspect of this dazzling new world, struggling to balance her artistic ambitions with the band’s expectations. As her confidence grows for the first time in her life, her priorities shift. She becomes reckless with friendship, romance, her ethics, and her bank account. But just as everything is going great and her boring, old life is falling away, Faun realizes just how blind she has been to the darkest corners of this glamorous musical dreamland as the summer heats up and everything spirals out of control . . .

Groupies is the debut novel from Sarah Priscus, which hits shelves on July 12, 2022. William Morrow publishing provied me an early galley for review.

The 1970's is really when music started to become a big part of my life, so a novel set in that time period in the world of rock 'n' roll is an absolute draw for me. Priscus really manages to capture the vibe of the times, peppering her story with just the right amount of touchstone references to give the story that authentic 1970's feel. Even the names of the characters - Faun, Josie, Kitty, Yvonne, Darlene, Floyd, etc. - perfectly echo that period.

Faun's story is interesting in that she quickly falls into the obsessive life of a hanger-on. She wants to be important; she wants to be known and thought of as cool. And she soon stumbles down that path of doing whatever it takes to get there. It becomes "her world". And as she does so, I found myself liking her less and less, but I believe that is exactly what the author wanted me to feel. Faun is not the victim here; she actively makes decisions that lead to her own misery and downfall, and the downfall of others. This is a bold writing choice that pays off well.

The ending turned into a direction I expected, not necessarily as satisfying for me though. I liked the dark tragic tone that the story had taken, so a promising light felt a little too neat, too clean of a way to end. Granted, Faun was still a long way from a normal life, but it implied that at some point she was likely to get there. That felt too convenient for me. Still, it was an engaging read that I would recommend to others.

Posted by Martin Maenza at 8:49 PM