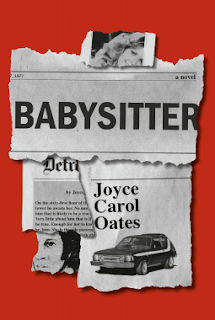 From one of America’s most renowned storytellers—the best-selling author of Blonde —comes a novel about love and deceit, and lust and redemption, against a backdrop of child murders in the affluent suburbs of Detroit.

In the waning days of the turbulent 1970s, in the wake of unsolved child-killings that have shocked Detroit, the lives of several residents are drawn together with tragic consequences. There is Hannah, wife of a prominent local businessman, who has begun an affair with a darkly charismatic stranger whose identity remains elusive; Mikey, a canny street hustler who finds himself on a chilling mission to rectify injustice; and the serial killer known as Babysitter, an enigmatic and terrifying figure at the periphery of elite Detroit. As Babysitter continues his rampage of abductions and killings, these individuals intersect with one another in startling and unexpected ways.

The latest novel by Joyce Carol Oates is Babysitter and will be released on August 23, 2022; Knopf Doubleday Publishing provided me an early galley for review.

While our library carries quite a few of Oates' previous novels, I must admit that she was not an author with whose work I was familiar. Thus, this one was my first experience with her writing style and approach. A number of things jumped right out at me from the start.

First, the author went with short phrases or words to title each chapter rather than number them. While not uncommon, it is definitely something I do not see as much in books I tend to read. I like that change of pace. It can be very effective and counter any "chapter-counting" (i.e., "how far do I have left to go") reading approaches.

What attracted me to this story was it being set in Detroit (I've been a northeast Michigan resident for almost a decade) in the later part of the 1970's (I was a child of the 70's). Given that, I expected a lot of familiar touchpoints. However, except for some sprinkling of actual locale names (versus the made-up ones that are also in there) and the continual year reference of 1977 (and very little other topical and cultural details of the decade), I felt this story could have taken place in any major city and any decade. For me, that was two wasted opportunities.

I also struggled with the writing style, especially in the early chapters of the novel. There was a lot of sentences that were not standard noun-verb structure. I was always taught that a prepositional phrase alone does not a sentence make; a few I can ignore but quite a lot comes across as distracting and a reading struggle. It almost felt like being in a perpetual state of extreme intoxication or a dazed cloud of confusion.

Lastly, I could not relate to any of the main characters. That might have been a side effect of the writing style or possibly just the dark nature of the story's subject matter (infidelity and brutal violence).

I am sure Babysitter will find its audience, especially for faithful Joyce Carol Oates readers. I just am not one of them.

Posted by Martin Maenza at 9:23 AM