Book Review: You Are (Not) Deadpool 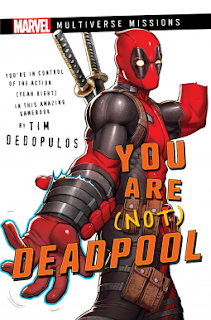 Things seem weird, even by Deadpool’s standards, when Matt “Daredevil” Murdock offers him a profitable – nay, straightforward! – contract. No chaos, no unpredictability, no funny business… C’mon, Murdock, that’s just not Deadpool’s style. Sensing something is up, Deadpool grabs an innocent bystander off the street to confuse any semblance of predictability the universe is trying to force on him. Good-hearted mischief spirals into a sinister plot full of impenetrable bank vaults, crime lords stroking their (lack of) mustaches in very evil ways, and an assortment of offensively stylish suits that are begging to be blown up, Deadpool discovers his choices are no longer his own – they’re yours!

You Are (Not) Deadpool is the first release in the Marvel Multiverse Missions Adventure Gamebook line by Aconyte books. Scheduled for release on June 30, 2022, the publisher provided me an early galley for review.

This is very different from the company's usual line of Marvel super-hero fiction titles. This one requires a six-sided die along with paper and pen to get the full enjoyment. The story starts out with a brief introduction and an explanation of "the rules". From there, the reader will make a decision - which then jumps them to a different part of the book. On that page, there is more to the story and then another choice. Some choices are just a "this or that" decision. Others require a roll or rolls of the die along with using character stats and such. Lather, rinse, repeat. You keep going on with the story until you get to an ending point.

This is very much in line with the classic "choose your own adventure" books that were popular in the 80's and 90's. Basically, the story is dynamic with options on where it goes. Very much a game that is repeatable if the reader makes different decisions each time they go through the story. This is definitely something that younger readers will enjoy.

Of course, as the title suggests, this one features that merc with a mouth - the ever-popular sarcastic Deadpool. Unlike his movies, this one is toned down a lot because the decision choices are really done by the reader, who acts as Deadpool's assistant Number Six (as in the six-sided die). The publisher seems very vested in the concept as they already have a second schedule volume in the series starring She-Hulk later in 2022.

If you're looking for something different, you might want to check it out. If you're strictly a straightforward fiction kind of person, maybe this one might not fill your bill.

Posted by Martin Maenza at 6:22 AM