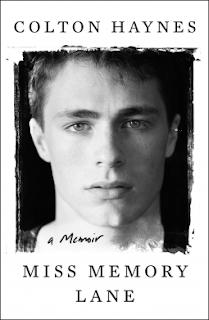 Four years ago, Colton Haynes woke up in a hospital. He’d had two seizures, lost the sight in one eye, almost ruptured a kidney, and been put on an involuntary psychiatry hold. Not yet thirty, he knew he had to take stock of his life and make some serious changes if he wanted to see his next birthday.

As he worked towards sobriety, Haynes allowed himself to become vulnerable for the first time in years and with that, discovered profound self-awareness. He had millions of social media followers who constantly told him they loved him. But what would they think if they knew his true story? If they knew where he came from and the things he had done? Now, Colton bravely pulls back the curtain on his life and career, revealing the incredible highs and devastating lows. From his unorthodox childhood in a small Kansas town, to coming to terms with his sexuality, he keeps nothing back.

By sixteen, he had been signed by the world’s top modeling agency and his face appeared on billboards. But he was still a broke, lonely, confused teenager, surrounded by people telling him he could be a star as long as he never let anyone see his true self. As his career in television took off, the stress of wearing so many masks and trying to please so many different people turned his use of drugs and alcohol into full-blown addiction.

Colton's autobiography Miss Memory Lane will be released on May 31, 2022. The publisher Atria Books graciously provided me an early galley in exchange for an honest review.

I was first introduced to Colton when he played the role of "Roy Harper" on the CW's Arrow series in 2014. During that time, I heard bits and pieces about his past, but I did not pick up on too much. I knew he was a gay actor who had modeled and later got into a variety of substances. This book is my first indepth look into his life for which we get a lot - from his childhood and teen years, through his time modeling. The chapters that cover his TV time are not as detailed; I suspect that might have been intentional. Where other biograpies might go indepth on the name-dropping and "then we did this", he shies away from a lot of those aspects. It is refreshing.

I have to say that Colton is a phenomenal writer. Just from the opening prologue, readers will have to recognize that he has a way with words and knows how to craft a powerful narrative. A number of times I had to remind myself that I was not reading fiction; his writing style so suits itself to that genre which I think he would do very well at.

Posted by Martin Maenza at 1:19 PM