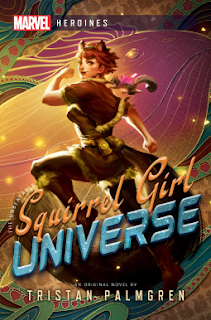 Squirrel Girl is in a pickle and a jam, a metaphor that mixes about as well as it tastes. She and her friends are lost in outer space, where there is a conspicuous absence of oxygen and, even more troubling, a shortage of squirrels. After hitching a ride on a passing space whale, Squirrel Girl and her trusty companions find themselves on a free-merchant space station and on the front line of a looming interstellar war. The stakes have never been so high, and trillions of lives are at risk! Luckily for the universe, Squirrel Girl is here to stand up against the odds and set things right across the galaxy.

Squirrel Girl: Universe, the latest in the Marvel Heroines novel series by Aconyte Books, is written by Tristan Palmgren. In advance of the August 2, 2022, release date, the publisher provided me an early galley for an honest review.

I admit that while I know of the character I have never read any comics featuring Squirrel Girl. So, with this book jumping right into action with her and her partners in crime-fighting, I found myself a little caught up in chaos. Of course, they're caught up in chaos too with New York City landmarks being abducted. By the time we get a few chapters in the narrative slows down a bit so I was able to get to know the cast - while they contemplated their predicament with the irritated Mad Thinker.

The combination of space travel and humor gave the book a bit of a Douglas Adams vibe ala The Hitchhiker's Guide to the Galaxy series. If that was Palmgren's intent, that is a high bar to strive for; I am not sure that the efforts managed to hit that mark for me. I found myself losing interest a number of times throughout the story - mostly because I did not have vested interest in most of the cast or the situation they found themselves in.

I suspect folks who are already Squirrel Girl fans will love this one. For the rest of us, reading a few of the character's comics first might be beneficial before picking this book up.

Posted by Martin Maenza at 2:16 PM