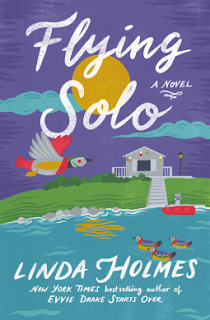 Smarting from her recently canceled wedding and about to turn forty, Laurie Sassalyn returns to her Maine hometown of Calcasset to handle the estate of her great-aunt Dot, a spirited adventurer who lived to be ninety-three. Alongside boxes of Polaroids and pottery, a mysterious wooden duck shows up at the bottom of a cedar chest. Laurie’s curiosity is piqued, especially after she finds a love letter to the never-married Dot that ends with the line “And anyway, if you’re ever desperate, there are always ducks, darling.”

Laurie is told that the duck has no financial value. But after it disappears under suspicious circumstances, she feels compelled to figure out why anyone would steal a wooden duck—and why Dot kept it hidden away in the first place. Suddenly Laurie finds herself swept up in a righteous caper that has her negotiating with antiques dealers and con artists, going on after-hours dates at the local library, and reconnecting with her oldest friend and her first love. Desperate to uncover her great-aunt’s secrets, Laurie must reckon with her own past and her future—and ultimately embrace her own vision of flying solo.

Flying Solo is the latest novel from Linda Holmes and will be released on June 14, 2022. Random House Publishing provided me an early galley in exchange for an honest review.

My first exposure to this author was through her debut novel Evvie Drake Starts Over; I selected it for the book club at the library where I work. It was an enjoyable, character-driven contemporary novel set in a fictious small town in Maine. And while Flying Solo is not a sequel to that one, it does take place in the same fictious town with an Easter egg reference to that novel as well.

Holmes again serves up a varied cast of characters who speak and act like folks you'd find in your day to day life. That tells me that she has a good observational eye as well as a good ear for dialogue. I also find it interesting that this book's plot centers around a duck while the lead character of her first novel was named after a male duck (a drake). Do I sense a pattern here? We'll see when she puts out her book three.

As a librarian myself, I naturally had an affinity towards the character of Nick Cooper. Holmes must either know a librarian or done her research into the profession as his actions and words had a very familiar, very authentic ring to them. Beyond that, I also felt a lot of sympathy towards him as the story progressed and as Laurie repeatedly pointed out how she wanted to spend the rest of her life. I couldn't fault Laurie for wanting what she wanted or fault Holmes with how she presented Laurie as a strong, independent woman who held firmly to that vision. Given all that, I found the ending unsatisfying. A commitment to a relationship means compromise; I seemed like Laurie was compromising a lot less than what Nick was. In the end, I don't think Nick would have ended up happy.

Posted by Martin Maenza at 9:18 AM