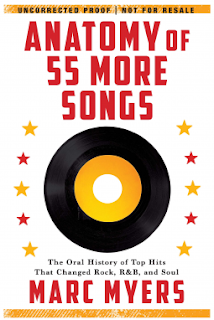 Songs that sell the most copies become hits, but some of those hits become something more—iconic recordings that not only inspire a generation but also change the direction of music. In Anatomy of 55 More Songs, based on his column for the Wall Street Journal, music journalist and historian Marc Myers tells the story behind fifty-five rock, pop, R&B, country, and soul-gospel hits through intimate interviews with the artists who wrote and recorded them.

Through an absorbing, chronological, song-by-song analysis of the most memorable post-war hits, Anatomy of 55 More Songs provides a sweeping look at the evolution of pop music between 1964 and today. This book will change how you listen to music and evaluate the artists who create it.

This sequel to Myers' 2106 Anatomy of a Song will be released on December 6, 2022. The publisher Grove Atlantic provided me an early galley in exchange for an honest review.

I first became familiar with Myers' work when he would come on to the Sirius XM music-talk channel Volume and its morning show Feedback. There, he would spend an hour going over his latest column with hosts Nik Carter and Lori Majewski, supplementing the pieces with music clips and more. I found I really enjoyed his in-depth analysis of these pop and rock classics.

I was born in the mid-60's and grew up on first AM radio and then FM too. As such, so many of the songs that are discussed in this collection are part of the musical tapestry that make up the soundtrack of my life. They are ingrained in my psyche and memories; I know every beat, every note, every lyric. What I enjoyed about this book is that now, through Myers' interviews, I could learn the stories behind the making of each of these fifty-five songs.

Hearing the stories from the writers and artists is important to me. Too often of late the news comes with the passing of another music industry legend. This collection of articles by Myers really captures those moments while the creators are still here to tell us about them.

If you're a music fanatic like myself, this is definitely one that you will want to check out. Each chapter is a digestible segment in and among itself. Together, they create a larger study of the musical landscape from the 60's through the 90's.

Posted by Martin Maenza at 5:33 PM