Sunday morning on the links 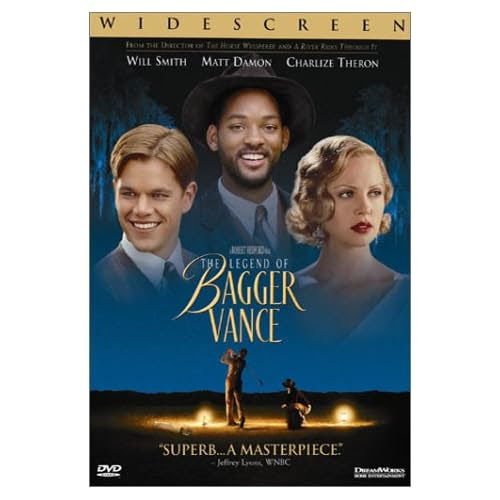 When I got up this morning, I spent some time on the links. No, I didn't go golfing - I haven't played a round of 18 in a number of years. No, instead I happened to flip on the television to catch the 2000 film the Legend of Bagger Vance.

The film stars Matt Damon as Rannulph Junuh, a WWI veteran who returns the town of Savanah, GA, after the war. When his former girlfriend (Charlize Theron) enlists him to play in a huge golf tournament with two big names, Junuh finds himself having problems. Enter Bagger Vance (Will Smith) as a mysterious wise-man with much wisdom to give - often in the form of symbolic stories and golfing metaphors. In the end, Junuh needs to find his rhythm to comeback from behind in the tournament and to make amends with the woman he loves.

Now, this film isn't going to excite everyone. There is a lot of golf involved and not everyone finds the game that interesting. Folks either love it or hate it. Still, Robert Redford did a great job directing this film. The feel of the period and the setting in the deep south in the early 1900's is perfect. And seeing those lush shots of the golf course in widescreen, high definition television - that makes it even more beautiful to watch.
Posted by Martin Maenza at 7:59 PM

Email ThisBlogThis!Share to TwitterShare to FacebookShare to Pinterest
Labels: films, the Legend of Bagger Vance

I noticed that on cable at some point when I was waking up today. Always been curious - I've resisted because I heard it got pretty nailed in the reviews (you said people will love or hate it? Appears a lot of people hated it!), but I've never actually known anyone who's seen it. Hey, I like all the actors involved, and I'm a golf fan (years of driving the cart for your father will do that). I'll give it a go one of these days when I can catch it from the start. Thanks for the heads-up.

We have a rule at our house - if reviewers pan a film, there is still a good chance we'll like it. The wife and I are weird like that. ;)

Is your Tivo/DVR smart enough that if you run across a film that is already started and you press record that it will go back and record it from the beginning? Ours is. I've done that with films I came up on a half hour in - just hit record, go watch something else and later it is all there. Nice feature.