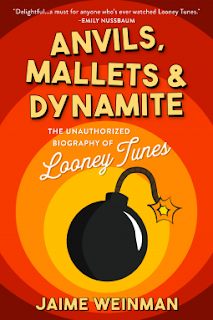 "Looney Tunes cartoons", writes celebrated television critic Jaime Weinman, "are the high-water mark of American filmed comedy." Surreal, irreverent, philosophical, and riotously funny, they have maintained their power over audiences for generations and inspired such giants of the cinema as Mel Brooks, Steven Spielberg, and George Lucas.

Here, finally, Weinman gives Bugs Bunny, Daffy Duck, Porky Pig, Yosemite Sam, Foghorn Leghorn, Tweety, Sylvester, and the whole cast of animated icons their long-awaited due. With meticulous research, he takes us inside the Warner Bros. studios to unlock the mystery of how an unlikely band of directors and artists working in the shadow of Walt Disney created a wild, visually stunning and oh-so-violent brand of comedy that has never been matched for sheer volume of laughs. The result is an unexpected and fascinating story that matches the Looney Tunes themselves for energy, humor, and ingenuity.

Sutherland House Publishing, out of Canada, released Weinman's Anvils, Mallets and Dynamite: The Unauthorized Biography of Looney Tunes in October of 2021. I was very pleased to have a chance to review an early galley of the book.

Like the author, I grew up on watching these classic cartoons on television, both on Saturday mornings and part of afternoon after-school syndication in the 1970's. However, being a bit over a decade older than he, I also can remember seeing some cartoon shorts on the big screen before a feature film. Thus, I had that extra touchstone as a child on how these shorts from the 1940's and 1950's might have played on in their original medium. All that together puts this book right into my pop-culture wheelhouse.

I truly appreciate Weinman's attention to detail, especially when he was describing particular shorts to illustrate his points about the artwork, the music, the trademark Looney Tunes humor and more. I found myself seeking out some of these online via YouTube and DailyMotion, just to refresh my memories of them - and I found myself smiling again as I had as a kid. I highly recommend to readers that they do so similarly; it definitely enhances the reading experience of this volume.

Weinman also takes time to discuss the various creative talents and their styles that made these cartoons such classics. Animation icons Friz Freleng, Tex Avery, Bob Clampett, Chuck Jones, Hugh Harman and Rudolf Ising, and Leon Schlesinger are all celebrated in the pages of this book.

For fans of animation as well as American pop-culture, I would highly recommend this book.

Posted by Martin Maenza at 7:44 PM