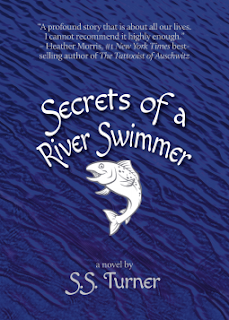 Coming to book-sellers everywhere on February 8th of 2022 is an interesting debut novel by SS Turner, from the Story Plant publishing.

As Freddy gazes at the majestic river gushing past him in the depths of a Scottish winter, he's ready to jump in and end his life. But what happens next is not what Freddy expects. From the moment he enters the river, Freddy starts a journey which is more beautiful, funny, and mysterious than he could have imagined. And through this journey Freddy's story becomes interweaved with a cast of unforgettable characters who are equally lost and in search of answers. Eventually they all unite in their quest for an answer to the biggest question of them all: will the river take them where they want to go?

I had the opportunity to review an early galley of this book which was accompanied by a "letter to the reader" by Turner. In that letter, the author explains how he has drawn from his own youthful experiences when he and a friend would jump into the River Tweed in Scotland and just let the current take them on adventures and conversation. This life-experience is reflected in the pages of the protagonist's own journey in this tale.

As I would imagine the experience of plunging into a freezing river would be, Freddy's story here is at times disorienting, surreal and jarring. And yet, the author also uses it to comment on grief, on bonding, and the nature of humanity (both the positive and negative aspects of it). Like a fast moving river, this story might appear one way on the surface but offers much more as its depths are explored. The reader just needs to have an open mind and open eyes to take it all in.

Posted by Martin Maenza at 9:48 PM