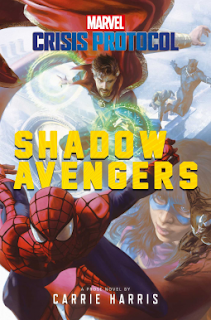 Earth is on course for a devastating invasion from the Dark Dimension, forcing the world’s mightiest heroes into unthinkable alliances, in this heart-stopping new novel in the Marvel: Crisis Protocol series.

Doctor Strange created the Shadow Avengers to save the world from Dormammu, but instead they’re on the verge of dissolution. When sudden weather anomalies across the world correspond with Asgardian heroes emerging from portals ripe with Dormammu’s magical signature, the Shadow Avengers realize the “Master” is making his move. Loki, Venom, and Green Goblin are behind a ceremony plotting to open a portal big enough to encompass Dormammu’s presence. From the Sanctum Sanctorum to the streets of NYC to beautiful Wakanda, the Shadow Avengers must stop Dormammu at any cost – but the Master, in all his cunning wisdom, has something greater in store that will doom the world once and for all.

Thanks to the publisher, I had the opportunity to read an advance of this adventure which hits bookstores on April 5th of 2022.

This was another fun Marvel romp, serving as a sequel to 2021's Target: Kree novel by Stuart Moore. Harris picks up on those plot threads and runs with them to a high-stakes, action-filled conclusion. This time we get Dr. Strange leading his special force against one of his dealiest foes. The cast is varied, both with heroes and villains, with everyone coming across exactly as they do in the comics. Harris nails every character angle to a T. She also makes sure to give something to the next author to play as this series continues.

This reminded me, in a very good way, of a 90's Marvel comic series called Secret Defenders. It was a quick read that I would recommend to most Marvel fans (old or new).

Posted by Martin Maenza at 6:54 PM