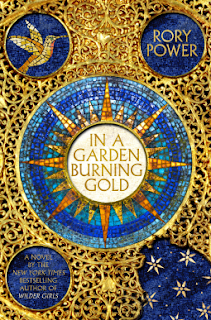 Rhea and her twin brother, Lexos, have spent an eternity using cunning and magic to help rule their small, unstable country. Rhea controls the seasons to show favor to their most loyal stewards with bountiful harvests and short winters, while Lexos keeps the tides strong and impassable to maintain the country’s borders. Reigning over them both is their father, who holds dominion over death, using his most powerful weapon—fear—to keep the people, and his children, in line.

For a hundred years, Rhea and Lexos have been each other’s only ally, defending themselves and their younger siblings against their father’s increasingly unpredictable anger while also trying to keep up the appearance of unity and prosperity within their borders.

Now, with an independence movement gaining ground, other nations jockeying for power, and their father’s iron grip weakening, the twins must take matters into their own hands to keep the world from crashing down around them. But as Rhea and Lexos travel beyond the security of their home to try to save their family, they begin to draw very different conclusions about their father’s style of rule. And if the siblings aren’t careful, they’ll end up facing each other on the battlefield.

I was given the opportunity for an early look at this fantasy novel in exchange for an honest review from the publisher (Random House-Ballantine). The book is schedule for availability at all book outlets on April 5, 2022.

Author Rory Power quickly pulls the reader into a very interesting fantasy setting. The world-building is carefully introduced while at the same time setting up the family dynamics of this ruling dynasty. I did not feel that either aspect overpowered the other; rather the two worked in perfect harmony to unfold an interesting story of politics, intrigue and more. I also enjoyed how, as the twins venture out into other parts of the realm, the reader sees how different ruling bodies conduct themselves. They both also realize how the world around them will change the way they have conducted themselves. It makes for a rousing read full of twists, turns and turmoil right to the very end.

Posted by Martin Maenza at 9:16 PM