J.D. Shelburne - live and on CDs 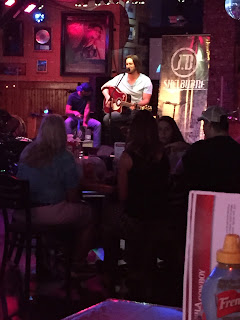 Our final day of our Nashville trip rounded out with a stop at the Tequila Cowboy, a restaurant and bar on Broadway. It was there that we were treated to final hour of an afternoon acoustic set by J.D. Shelburne. He was joined on stage by acoustic cajon player Eric Carby.

Shelburne hails from Taylorsville, Kentucky. This hard-working musician has been playing gigs regularly since he graduated the University of Kentucky in 2007. He has even opened for such big name country acts as Kellie Pickler, Montgomery Gentry and Miranda Lambert.


One of the first songs we caught during his live performance was a bit of a 90's remix, where he gave the audience a fun take on the theme from The Fresh Prince of Bel Air, some Vanilla Ice, and a little Whoomp There It Is among other 90's nuggets. He then went into a few original songs from his first two CDs, which we were more than happy to purchase from his merch table. I firmly believe in supporting an artist directly - to help with his career and put all the money directly into his pocket. 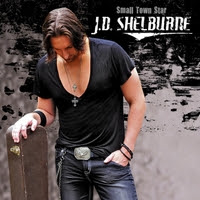 His first CD from 2012 is simply titled J.D. Shelburne EP. It features six tracks total, four of which Shelburne co-wrote with Bob Stewart whom he gives special thanks to in the liner notes.

First up is "Farmboy", his debut single which began hitting the country airwaves in July of 2012. The up-tempo tune reflects back upon his time growing up in a farming town and the lessons he learned from his grandfather.

The mid-tempo "Grandma & Garth" is up next. This song is about family, a re-occurring theme in his early songs, as well as the importance of music in their lives. The lyrics are based on a true story from his life, when he found his uncle's guitar in the belongings of his grandmother after she passed away. "Unanswered Prayers" by Garth Brooks is one of the first songs he learned to play on it. "Grandma and Garth" was one of the songs he performed live at the Tequila Cowboy last weekend.

Shelburne solo penned the next track, "Smalltown Star", another autobiographical tune. That's something I like about his music - it tells his story from his very heart and soul.

"Love Hard" is the only track on the debut that Shelburne did not have a direct hand in writing; this one was written by Lee Brice and Brett James. It has a great rhythm to it that the listener quickly finds his foot tapping along to. Its message is one we all should heed - if there are people in your life who mean the most to you, make sure you show them while they are still here.

I like the layering of the instrumental hooks on "Summer", a song that can bring back memories of the carefree days of youth.

The final track here is "Something Bout a Smalltown". The lyrics remind me of growing up in a small town myself and how you were able to keep up on the stories of the folks you knew. 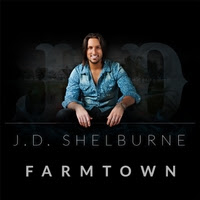 His second release is the 2014 album Farmtown. Again, he teams up with Stewart for the writing of six of the seven tracks that can be found here.

"See You on the Radio", a mid-tempo tune penned by Phil O'Donnell, James Wesley and Bob Dipiero, starts off the set. Playing this CD back to back with the previous one, I am picking up on a little bit of a "seasoning" in Shelburne's vocals in just a few short years.

"Truck or Tractor" has a ton of energy. It is a song that would be right at home on a road-trip playlist; it makes me want to roll down the windows, turn up the volume and drive down the road.

"Famous" harkens back to the themes from the first CD, of growing up in a small town. It even touches upon lyrical elements from a number of those tunes.

"Grandpa's Truck" is next. Again, the focus is on family. This one makes me think of the time I spent with my own grandfather and how it was cut short when he passed away suddenly when I was still a kid in the 70's.

Next is the upbeat, mid-tempo "Love in a Farmtown". It reflects back upon the days of young romance.

Shelburne slows things down with the piano-based "That's How I'll Remember You", an intimate song about a love lost. This one really stands out from the rest, for me. It is very heartfelt and personal and vulnerable.

The album closes with a bonus track "Next Big Thing", a tribute to the James Graham Brown Cancer Research Center.

J.D. Shelburne can be found all over social media. He tweets at @jdshelburne and his Facebook page can be found here. His full website is at http://jdshelburne.com. If you are interested in checking out his music, you can do so on Spotify and iTunes.
Posted by Martin Maenza at 4:00 AM

I have been following JD now for awhile Thank You so much this article it is great! We travel to Nashville from Louisville often to see JD at Tequila Cowboy and many other of his shows! His acoustic set is awesome and his full band is fantastic!! Go see JD Shelburne I promise it will be a show you'll love and remember and will want to see again and again !!

Patsy, thank you for reading and posting a comment. I greatly appreciate it.

Martin Maenza, you should also check out the 14 year old dynamo who was also performing with Shelburne. We saw her that same day at Tequila with Shelburne and his drummer .Here is a link we found on her https://m.Facebook.com/FaithGomez516