A Night at the Opry 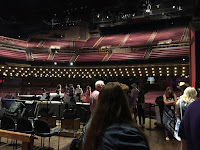 This past weekend, we took a family trip down to Nashville, TN. Our son was playing in the Yu-Gi-Oh Nationals card tournament, so my wife and I decided to take in the tourist sites of the city. Top on the list was, of course, a visit to the Grand Ole Opry.


We took in the show on Friday Night (June 26th) for the taping of the longest running radio program in the country (which can be found on WSM 650AM as well as streamed online from the Opry website and mobile apps and on SiriusXM satellite radio). For having decided late in the afternoon to go, we managed to score some amazing seats (section 4 row D) - basically center stage. For two hours, we were treated to a wide variety of musical acts. 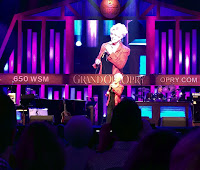 The first half-hour section was hosted by the legendary Connie Smith, a member of the Country Music Hall of Fame as well as an Opry member. Her initial career spanned from the mid-60's through late 70's, and she returned to recording in the late 90's. She opened the show and then introduced two additional acts.

The first was the Farm, the country music trio of Nick Hoffman, Damien Horne and Krista Marie. From the opening notes of their 2011 hit "Home Sweet Home", I was an instant fan. I loved their energy and how they engaged the crowd. They followed it with their 2012 hit "Be Grateful", whose message of being thankful for what you have was inspirational.

Next up was Mike Snider, a bluegrass banjo player and humorist who got his start in the early 80's. In 1990, he was inducted into the Opry by comedian Minnie Pearl, and he even appeared on Hee Haw from 1990 to 1996. He brought with him a trio of musicians who entertained us with a pair of instrumental numbers.

Smith then came back to close out the first act with another wonderful number. Her vocals were amazing.

The second half hour was hosted by the Riders in the Sky. This quartet of colorful western musicians seamlessly mix music and comedy into their performances. They have won two Grammy Awards and even did "Woody's Roundup" for Toy Story 2, and they have appeared at the Opry over 700 times.

Their first guest was Rhett Akins who began his country recording career in the early 1990's. Akins delivered two tunes for the audience. Next out was Russell Moore and IIIrd Tyme Out, a bluegrass band who hail from Georgia.

The Riders closed out the segment with another rousing number, this one lead by Too Slim (Fred LaBour)- who had a bit of fun with the sign-language interpreter who was signing for some hearing impaired audience members.

The third act was hosted by country music legend Bill Anderson, another Country Music Hall of Fame and Opry member. His career has spanned decades, starting out with making records in 1959. He has also had a number of spins on television, including a three year stint acting on the ABC soap opera One Life To Live.

After his first number, he introduced the Whites, a family group who got their start in country music in the early 1970's. They appeared also on the soundtrack for O Brother, Where Art Thou?. Per the format, they entertained the audience with two tunes from their catalog. 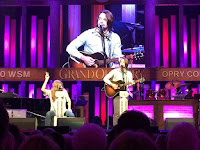 Next up, Anderson introduced the group Sundy Best, the country rock duo of Nick Jamerson and Kris Bentley who hail from Kentucky. The group got its start in 2012 and have a trio of CDs under their belt. Their performance of "I Wanna Go Home" tore the roof off the place. Bentley's playing of the cajon, a Peruvian percussion instrument in the shape of a box, really captured my wife's attention. This is the second group of the night whose music I am most definitely going to pick up very soon.

Anderson then closed out the segment with his 1963 hit "Still", featuring the Opry Land backing vocalists in a prominent duet role. 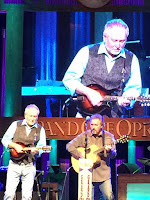 The fourth and final half hour segment was hosted by Diamond Rio, an American country band who got their start in the early 80's at the Opry Land amusement park. They kept the energy level going with their opening performance.

Next, we were treated to some more bluegrass courtesy of Bobby Osborne and the Rocky Top X-Press, a group that is also a family affair as it features his sons. Osborne had been recording since the 50's and is also a member of the Opry. One of their numbers included a rousing rendition of the favorite "Rocky Top" which had everyone clapping and singing along.

Next, Doyle Dykes came out to deliver, on his acoustic guitar, a patriotic medley in appreciation of our men and women in the service; it really moved the audience. For his second number, he was joined by the Booth Brothers, an American gospel group, who continued to touch the spirits of the audience.

Diamond Rio then closed out the show with another of their hits. 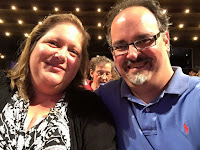 After the show, we took the backstage tour that gave us more background into the Opry, how it rebuilt after a devastating flood in Nashville a few years back, and also showed up the over a dozen themed dressing rooms and the open-area "green room" just off stage. Finally, we were able to actually step out on the stage and even stand in the circle at center stage - a circle whose wood was brought over from the Opry's previous home at the Ryman Auditorium.

All in all, it was an amazing night of music. I found a number of groups I'm ready to seek out albums for, and I even plan on tuning in on occasions on Friday and Saturday nights for the weekly broadcast.