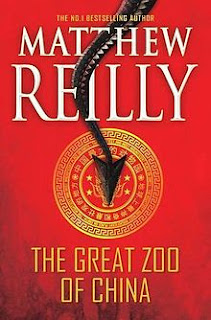 The Great Zoo of China, a novel by Australian author Matthew Reilly, was released in January of 2015 here in the US. I've had it sitting on my iPad for awhile now and finally got to a few weeks ago.

The premise of the story is that the Chinese government has built a massive new tourist attraction, appropriately called the Great Zoo of China. There goal is to create a tourist attraction that can rival that of any in the United States or the rest of the world. But a lot of secrecy surrounds the zoo until a group of dignitaries and press are brought to it prior to its grand opening. Among the group is Dr. Cassandra Jane "CJ" Cameron, an alligator export now working as a freelance journalist, and her photographer brother Hamish.


They soon learn, upon arrival, of the zoo's mysterious population - dragons!

As you would suspect, things go awry immediately and the humans find themselves fighting for their lives against these large, powerful beasts who want nothing more than their freedom and revenge against those who would try to tame them. If this sounds a bit like Jurassic Park, guess what? Michael Crichton's 1990 novel was a favorite of Reilly's and a big source of inspiration.

For me, I have never read the former's novel or seen any of those movies. Okay, for those who are demanding I turn in my geek card now, know that I am not a huge fan of gory violence in films. Reilly's novel very much embraces that aspect though, as you suspect, there are a ton of casualties in the battle to stop the beasts and reclaim the zoo before they can escape.

What I liked about this novel was how the author explains the presence of dragons. I can get on board with that theory and see it as a plausible explanation. I also found his style of dragons (sleek and swift) to be a good take.

One thing I did not like about the book though was the pace. Once the stuff hits the fan, there is a non-stop rollercoaster ride to the end. Granted, the impeding nature of the plot and the antagonist sort of predicates this, but it simply does not let up. The reader jumps from harrowing situation to harrowing situation. Would this make a great movie? Sure. Do you have any care about the victims? Nope. They are nameless, faceless cannon fodder.

The other thing I did not like was the do-it-all abilities of the protagonist. I have read a lot of fan-fiction over the years, and I am pretty good at tagging a "Mary Sue" sort of character. This is someone who has all the answers, who everyone turns to for direction, and who manages to pull out exactly what he/she needs for any given situation. CJ comes across very much like that. The focus is so much on her that all other characters suffer in the department of characterization. Yes, it is her story and she's the big hero. But even when we cut away to other characters, it is only for a short bit - a page or two - and then it is back to her.