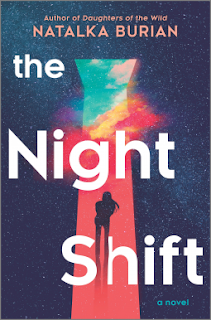 Hidden behind back doors of bars and restaurants and theaters and shops all over New York City are shortcuts—secret passageways that allow you to jump through time and space to emerge in different parts of the city. No one knows where they came from, but there are rules—you can only travel through them one way and only at night.

When Jean’s work friend Iggy introduces her to the shortcuts, it’s to help shorten her commute between her two night shift jobs. She is intrigued but has a hard time shaking the side effects—the shortcuts make her more talkative, more open to discussing her past and recalling memories she’s tried hard to forget. When Iggy goes missing, Jean believes it’s related to the shortcuts and his growing obsession with them. But as she starts digging into their origins, she comes to find a strange connection to them. A shimmering, propulsive novel set in New York City during the early aughts and across time, The Night Shift shows that by confronting the past can we reshape our future.

This novel is scheduled for publication on July 12 of 2022. Harlequin Trade Publishing provided me an early galley to read in exchange for an honest review.

As a music fanatic, I really appreciated the author's various references to new-wave and alternative bands and songs. It gives the whole novel a built-in sort of soundtrack.

I have always had a fascination with New York City, starting from when I was a kid reading comic books and watching TV and movies. It always seemed like a vibrant, mythical place. The author captures that element of energy and mystery here. In my early 20's, I got the opportunity to visit the city a couple times and would always be open for returns there again.

What drew me into this book was the concept of these "shortcuts" in the city. They start out as a very mysterious, almost mystical concept that moves the story quickly from contemporary urban fiction into one that is fantastical. I think the idea is very genius and thus an intriguing foundation upon which to build the story of the characters involved.

Just as the shortcuts tend to leave the passers-through a bit disoriented, there were places in the narration where I as a reader felt that way. I am not sure that was the author's intention. That feeling seemed to pass as the story got back into the groove once more. Things really pick up when Jean and her various acquaintances band together to attempt to make everything right. The ending of the story seemed to pull together very quickly; I almost would have preferred some trimming of the earlier chapters to give the ending some space to breathe.

Posted by Martin Maenza at 9:02 PM