Book Review: How to Date a Superhero (And Not Die Trying) 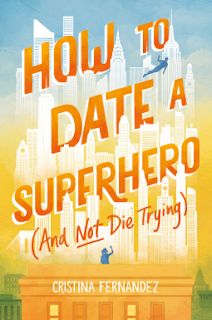 Falling for a superhero is dangerous. You have to trust that they’ll catch you.

Astrid isn’t a superhero, not like the ones she sees on the news, but she has something she thinks of as a small superpower: She has a perfect sense of time. And she’s not going to waste a single second. Her plan for college is clear—friends, classes, and extra-curriculars all carefully selected to get her into medical school.

Until Max Martin, a nerdy boy from high school, crashes back into her life. Things with Max were never simple, and he doesn’t keep to her schedule. He disappears in the middle of dates and cancels last-minute with stupid excuses. When a supervillain breaks into her bedroom one night, Astrid has to face the facts: Her boyfriend, Max Martin, is a superhero. Double-majoring as a pre-med was hard, but now Astrid will have to balance a double-life. This wasn’t part of her plan.

How to Date a Superhero (And Not Die Trying) is the debut novel from Cristina Fernandez. This young-adult romance novel comes out on August 2, 2022; the publisher Harper Collins provided me an early galley in exchange for an honest review.

First, kudos to the author for completing her first novel while still a college student herself. That is an amazing feat. It also helps being in the midst of her own collegiate years when writing about a college-aged heroine. It lends that authenticity to the setting.

I like the idea of a super-hero story that focuses on the significant others of the costumed champions. It is an angle that does not get as much focus; it has a wealth of potential for stories. However, when doing that you have to really make the normals engaging. I wish there was a bit more of that here. I felt that many of the characters came across as a bit flat and one-dimensional.

The other challenge when focusing on the normals is that all the super-hero action happens around them (for the most part). That means that the story ends up being more dialogue driven and not action driven. The super-hero genre thrives on that action element. Putting that in the background or provided via heresay means the characters need to be even more engaging to compensate for it. That was not what I found here.

Because the book is shooting at a YA (young adult) audience, all of that might be fine and expected. YA books tend to be more about relationships and dynamics between people anyway. They also tend to be more balanced when it comes to showing all kinds of relationships, even LGBTQ ones. As a man in his fifties, I'm very much outside of that target YA audience. Maybe it will work for younger readers in their teens and early 20's.

Posted by Martin Maenza at 7:54 PM

Email ThisBlogThis!Share to TwitterShare to FacebookShare to Pinterest
Labels: book review, Cristina Fernandez, fiction, Harper Collins, How to Date a Superhero (And Not Die Trying), Netgalley