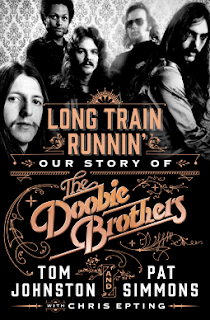 Only a very few rock bands have had the longevity, success, and drama of The Doobie Brothers. Born out of late 1960s NorCal, and led by Pat Simmons and Tom Johnston, they stood alongside their contemporaries The Grateful Dead, The Allman Brothers, and many others as an iconic American rock band. The train was rolling along, hits were flowing like wine, and arenas were packed with fans who wanted to see them live...then Tom Johnston, the band’s front man and lead guitarist, became ill and had to leave.

The Doobies' train came to a screeching halt. All of a sudden the band started contemplating the end of the road only seven years into their career, just as things were taking off. But Pat Simmons made sure they were far from the end and began the process of keeping the band together through most of the next decade.

A soul-steeped backup singer for Steely Dan named Michael McDonald took a shot at singing some of the Doobies' songs on tour, and all of a sudden a new chapter in the Doobie Brothers' story began. The band expanded their sound and had even more hits with their new front addition. Tom recovered from his health issues, but the band had moved on. When it came time for a reunion concert in the ’80s, Tom got the call and was back in the mix. Led once again by Pat and Tom, The Doobie Brothers have been touring ever since and maintain a massive fan base the world over.

Long Train Runnin': Our Story of The Doobie Brothers is scheduled to be published on May 10 of 2022. The publisher St. Martin's Press provided me an early galley in exchange for an honest review.

I have been a fan of the Doobie Brothers for over forty years. I have all of their albums from their debut in 1971 through the 80's as well as their most recent release. I knew their musical legacy, but I have never known their background story until reading this book.

I really enjoyed the narrative style used here, which is mostly a back and forth between Pat and Tom as they tell the band's story (with the interjections of other key folks as needed). Their approach is comfortable, jovial and familiar - like old friends recalling memories over a few beers. Like the title, it takes this "narrative train" awhile to get us to the band's formation - about one fifth of the way through the book, but this is all about the journey. The background on getting to the formation is interesting as it explains to the reader all about the members' roots and musical influences. This gave me more classic bands (like Moby Grape) to look into.

Of course, I had to smile when I read how the band got its name as it was exactly what I always mused of where it came from. Also, as a 70's kid, I was super pleased to see a short chapter talking about the band's appearance on a two-part episode of the ABC sitcom What's Happening, a show I regularly watched. If someone smiles when I say "Which Doobie you be?", I know they are part of my tribe.

The book rolls through recording sessions and tours at a fairly steady rhythm. If you ever wanted to know details about a particular song in their catalog, there is almost a one hundred percent chance the guys talk about it in the book. Everything is in chronological order with chapters often taking their titles from songs in their discography.

This is a must-read for true fans, but it is also enjoyable for the more casual of followers of the group.

Posted by Martin Maenza at 1:26 PM