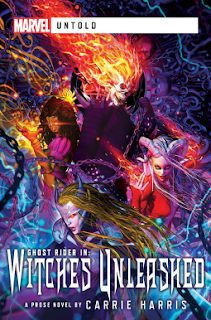 Coming in November is Witches Unleashed, a Marvel Untold novel by Carrie Harris.  The publisher Aconyte Books let me read an advanced galley in exchange for an honest review.

Johnny Blaze, aka the Ghost Rider, has accidentally released Lucifer from Hell. While hunting the 666 fragments of Lucifer’s soul now loose on Earth, Johnny enlists the aid of witches Jennifer Kale, Satana Hellstrom and Topaz to track down a sliver of the demon which is possessing the body of Jennifer’s cousin, Magda. Lucifer is looking for the Tome of Zhered-Na, aiming to release the demon within its pages and unleash hell upon the world. But the witches are the Tome’s protectors, and they aren’t going down without a fight.

I really enjoyed the pairing of the four lead characters. Each has his or her roots in 1970's Marvel horror comics, and the combination is a very interesting mix of powers and persoanlities. Harris weaves a fast-paced narrative that allows each character to shine. I would recommend this novel to Marvel fans who enjoy a deep dive into the supernatural side of that universe, or to action story fans in general.