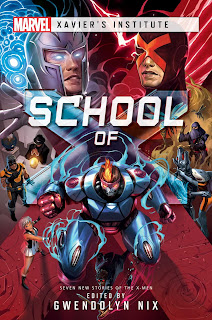 Coming in December 2021 is School of X, a Xavier's Institute anthology in the Marvel line from Aconyte Books. I was given the opportunity for an advanced look in exchange for an honest review.

The New Charles Xavier Institute isn’t all it’s cracked up to be: the food is so-so, it’s cold eleven out of twelve months, not to mention the creepy bunker vibes with mysterious tech popping up all over the place. But for the next generation of X-Men, it’s home. Under the stewardship of Emma Frost, Cyclops, and Magneto, these new recruits learn to control their powers and defeat villainy. Yet, danger lurks within the academy and it isn’t just monsters or evil geniuses. Now, these fresh X-Men must understand what it means to fight not just yourself, but alternative shades of who they might have become in the past, present, and future.

Gwendolyn Nix is the editor for this anthology of seven short stories featuring the latest class of merry mutants. These are not your father's X-Men (or, in my case, the X-Men I grew up on in the 80's). This is a new breed of young heroes whose stories are presented by a varied pool of writing talents. In "Your Fifteen Minutes" by Jaleigh Johnson, movie night turns into a deadly re-enactment of 80's action scenes. In "Call Of the Dark" by Robbie MacNiven, Graymalkin must face his own personal darkness. In "Uncatchable" by Cath Lauria, Hijack discovers the secret behind a late-night street racing event. In "Eye Of the Storm" by Amanda Bridgeman, a trio of mutants is tested against man-made menaces. In "Of Dirt and Bones" by Pat Shand, a traininng exercise has an unexpected effect on Phoebe Cuckoo. In "Kid Omega Faces the Music" by Neil Kleid, the titled mutant takes in the past which has a major impact on his future. And, lastly, "Depowered" by Carrie Harris is a novella length story about what happens when the students are left unsupervised and a threat comes knocking at the door.

I myself happen to love anthologies, especially ones involving stories about super-heroes. My personal library includes many from Marvel and DC as well as all of the Wildcards series that is edited by George R.R. Martin. The short story format is good for delivering concise tales that can focus on characters and interactions. The stories in School of X fit that criteria as well. A number of these stories also seem to be laying the groundwork for future novels in the series.

This format worked very well, though some tales appealed to me more than others. I do hope that the publisher is able to do more anthologies like this one. I would personally enjoy seeing one focusing on villains from the Marvel universe as those stories always fascinate me.

Posted by Martin Maenza at 3:15 PM