Book Review: The Rebels of Vanaheim 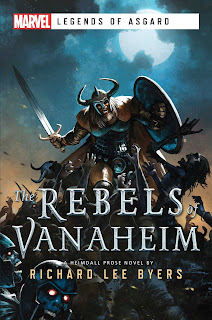 The dead have returned.

Odin, All-Father of Asgard, dispatches the heroic warrior Heimdall and the Valkyrie Uschi to eliminate a mysterious infestation of draugr – the living dead – in the proud realm of Vanaheim. Yet his home is not as Heimdall remembers it. Anti- Asgardian sentiment is rife, and the arrival of just two warriors from Asgard to deal with the draugr threat only incenses its people further. With rebellion growing in Vanaheim, Heimdall must investigate this conspiracy and the undead, even if it pits him against his own kin, to preserve the peace of the Realm Eternal.

In The Rebels of Vanaheim, author Richard Lee Byers brings his vast experience in horror and fantasy to the Marvel Legends of Asgard series by Aconyte books. He mixes those elements very well and ties it all into the Norse mythology that Stan Lee first developed for the classic Thor comics. I was very pleased to be able to read an advance copy of this novel which will be published in December of 2021.

The inclusion of draugr, dwarves and named swords of power makes for a classic fantasy tale filled with adventure and high-stakes. Byers shines in this regard, and what he presented here makes me interested in seeking out more of his work. Another high point of the book, for me, was the framing sequence that allows for this story from Heimdall's past to be told. I would really like to see Byers give us more of this prologue/epilogue as it was told with an interesting dynamic and a touch of humor.

Posted by Martin Maenza at 7:43 AM