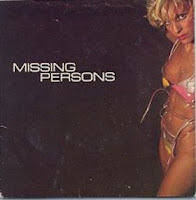 This month marks the thirty-fifth anniversary of the self-titled four-song debut EP from Missing Persons. However, it was out for over two years before it hit the charts; in May of 1982 it entered the US Billboard Album chart and spent forty-seven weeks total on the chart with a peak position of number 46.

For more reviews from the group's music, click here.
Posted by Martin Maenza at 4:00 AM