the Go-Go's - Beauty and the Beat 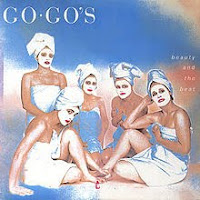 In the 60's, we had the Shirelles, the Supremes and the Ronnettes.

In the 70's, we had Patti LaBelle with her Bluebelles, and Joan Jett and Lita Ford in the Runaways.

As the 80's began, a new age of girl-groups came into vogue and leading the charge were the Go-Go's.


This all-female band from California started in the late 70's playing local venues. The band consists of drummer Gina Schock, guitarists Charlotte Caffey, Kathy Valentine and Jane Wiedlin, and features Belinda Carlisle on lead vocals. They released their first major label debut Beauty and the Beat on July 8th of 1981; it reached number 27 in Australia, number 20 in Sweden, number 2 in Canada and number 1 on the US Billboard Album chart.

The album features two US Billboard Top 20 hit singles that everyone tends to know - "Our Lips Are Sealed" which was co-penned by Wiedlin and then boyfriend Terry Hall (frontman for the Specials and later Fun Boy Three - FBT later released their own version of the song which is interesting coming from a male voice) and "We Got the Beat" which was penned by Caffey. In fact, ten of the eleven songs on this album were penned by these two ladies - some solo and some as collaborations. Carlisle co-penned "Skidmarks on My Heart" with Caffey and Valentine penned the final track "Can't Stop the World".

Next is "How Much More" which I think could easily have been a hit if released as a single. The pop punk band Supernova agreed when they released a cover version as a single in 1996.

"Lust to Love" has a great beat by Schock in a classic Fifties rock vein.

The side closes with "This Town", another track I think could have been a hit single.

Continuing with side two and the first track there - "We Got the Beat" - those six songs tend to represent this album in most retrospective collections of the band. They showcase the musicianship and the lyrical-voice of this band - making this one of Rolling Stone's top 500 albums of all time and earning it a place on "the 1001 You Must Hear Before You Die" list. It really helped set the one of the tones for the early 80's sound. As the second single, "We Got the Beat" hit number 35 on the US Billboard Dance chart, number 29 in Australia, number 7 on the US Billboard Mainstream Rock chart, number 3 in Canada, and number 2 on the US Billboard Hot 100. It was also featured over the opening credits in the 1982 film Fast Times at Ridgemont High though it was not on the soundtrack (instead the band offered up an all-new track "Speeding").

The last five tracks don't get as much credit though and that's a shame. There are some gems in these deep tracks that deserve a periodic listen, espcially when you want to move away from the hits from this band.

"Fading Fast" is a song the speaks to broken relationships and getting over the ex.

Next is "Automatic". It was released as a single in 1982 but did not chart.

"You Can't Walk In Your Sleep (If You Can't Sleep)" has a nice, bouncy rhythm even if the lyrics are a little clunky in spots.

"Skidmarks On My Heart" is a great title and a solid tune all the way around; I'm sure it was great live.

There is some outstanding guitar work on "Can't Stop the World", showing how the three women strummers worked together for that signature sound. This one was the B-side to the second single.

The Go-Go's definitely take me back to my high school years, having gotten to enjoy the songs in my sophomore year. Their videos were part of the early days of MTV, and the gals tended to take well to the video format nicely. That certainly helped add to their success, icing on the musical cake if you will. When I listen to this album, I tend to think of those summer days of my youth. Good stuff.
Posted by Martin Maenza at 1:37 PM

This really does get me thinking...I'll have to listen again :)

That's the spirit. Give it a second chance - maybe you'll hear something new.