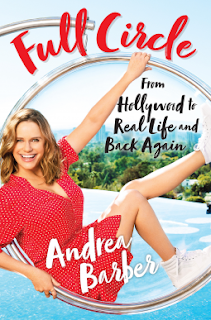 When Kimmy Gibbler burst into the Tanners’ home on Full House in 1987, audiences immediately connected with the confident and quirky pre-teen character, played by ten-year-old actress Andrea Barber. During an eight-season run on one of the most popular series of the ‘80s and ‘90s, Andrea came of age in front of millions. But she was as far removed from her character as a girl can get. The introverted young star was plagued with self-doubt, insecurities, and debilitating anxieties that left her questioning her identity after the show’s cancelation. Andrea wouldn’t return to the public eye until 2016, for Fuller House. So what happened in those intervening decades that Andrea jokingly calls “the lost years”?

For starters, Andrea never stopped working. But it was on a series of life-changing transitions: earning a college degree, then a Master’s, building a career in international education, getting married, and starting a family. She also faced some unforeseeable transitions: navigating a sudden divorce after nearly twelve years of marriage, and second-guessing her capabilities as a single mother. But it was her devastating bout with post-partum anxiety and depression that derailed Andrea’s life—and became a crucial turning point.

Full Circle: From Hollywood to Real Life and Back Again was released in November of 2019 from Kensington Books.

Full disclaimer: I have always been a Full House fan. I watched it back in the day and watched the return show on Netflix a number of years ago. What can I say: I like light family sitcoms. They put me into a happy place where the problems of the day-to-day world can be shut off for a half hour.

I really enjoyed Andrea's story. She comes across as honest and real, and I found her retelling of her life to be sincere, heartfelt and, at times, incredibly funny. I was not aware of her experiences between her stints on TV, and I found those to be very fascinating indeed. I also felt for her struggles with anxiety, depression and her divorce. She does not sugar-coat any of the things she has gone through; she is not concerned about image or how it comes across. She wants to share her experiences in hopes that it can help others with their own struggles and challenges. That is the sign of a good person.

Posted by Martin Maenza at 8:55 PM

I doubt I'll be reading her book, but I enjoyed YOUR take on it Martin--thanks for sharing. I gotta admit, I did watch (and enjoy) all the seasons of 'Fuller House' on Netflix and was surprised I enjoyed them as much as I did! Good review here.