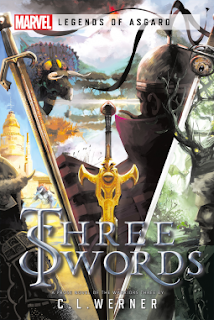 While helping some rebels overthrow their tyrannical king, the Warriors Three meet an old mystic who claims to have been waiting for them. He describes to them the threat posed to Asgard by three sorcerous brothers, the Enchanters, who are each working to create an army to conquer Asgard. But the Enchanter’s towers are scattered across time and space, and the Warriors Three will have to risk life and limb to stop these sorcerers before they can overthrow Odin’s rule. But things are not quite as they seem, for in the shadows, someone is plotting against these heroes.

Whenever this trio of Asgardian heroes - Fandral, Hogunn and Volstagg - appeared in the comics, it always meant a rousing adventure. Visually, they have great contrast, and their differing personalities also set up for a dynamic mix. As such, I was very pleased to find them starring in this upcoming novel (to be released in February 2022) and excited to read the advanced galley from the publisher in exchange for an honest review.

The novel does provide for plenty of adventure; the reader is deposited right into the thick of the action from the first chapter with the fights continuing all the way to the final pages. However, I found that the usual banter between the group lost some of its charm in a prose only form. Sure, we have Volstagg's boisterous bravado and Fandral's enduring charm (with a strong reference to his resemblance of the legendary Robin Hood), but I found Hogunn sort of faded into the background quite often.

The symmetry of three leading protagonists is mirrored by three foes, each hiding out in three varied locales. This leads to a lot of variables, some which worked well and others less so. At least they insured that the story always kept moving and did not feel like it had slow moments of padding that can sometimes occur in fantasy adventure novels. Lastly, there is a twist that did not take this reader by surprise at all.

I would recommend this to fans of Thor and Asgard, first and foremost. Having a familiarity with the Warriors Three will help readers get the most enjoyment from this novel.

Posted by Martin Maenza at 4:11 PM