Book Review: Reign of the Devourer 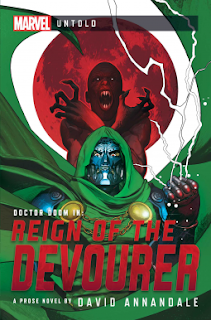 Victor von Doom saw his future for an instant, and now he cannot rest. His obsession with regaining those memories leads him into the arcane science of geomancy. As he delves into the ancient memories that lie beneath his land, Doom discovers a tremendous concentration of power... one that should never be explored. Doom's excavations and necromancy fracture the prison of something awful: the Devourer of Souls. Now free to roam Latveria, the Devourer spreads a plague of soul-hungry vampires. Doom must choose between seizing this power for himself or destroying it, before his realm is no more.

Coming in January of 2022 is the latest in the series of Marvel Untold novels. I was given the opportunity to review an early galley for Reign of the Devourer, written by David Annandale.

This novel is a sequel to Annandale's The Harrowing of Doom which came out in early 2021. While the rest of the Marvel world views him as a villain, to the people of Latveria he is a "hero". And when his kingdom and subjects are threatened by a powerful, evil entity, he rises to the challenge as a protector. This is why Doom is one of my favorite Marvel villains - because he is so complex. Once again, the reader is treated to a wonderful portrayal of Doctor Doom; Annandale captures those multifacets perfectly. When Doom is advising those around him to push further, to challenge their own limits, he shows the redeemable qualities of his personality.

I would very much recommend this novel, especially if you enjoyed the first novel in this series.

Posted by Martin Maenza at 5:13 PM