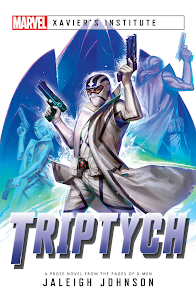 Former super-soldier and master thief, Fantomex, stumbles upon one of his clones, Cluster, breaking into museums to steal priceless artifacts. Outwitted and intrigued, Fantomex decides to beat Cluster at whatever game she’s playing. But something is different about these artifacts.  And they aren’t the only ones looking for them… Their other clone, Weapon XIII, is on the hunt too. The cat-and-mouse heists test their burglary skills and push the boundaries of how much they can trust one another.

Triptych, a Marvel: Xavier's Institute novel, is scheduled for a September 2021 release.  I was graciously allowed an early preview galley from the publisher in exchange for an honest review.

Admittedly, I was unfamiliar with the main characters of this story. Fantomex, Cluster and Weapon XIII first made their debuts in 2002 in New X-Men #128 (written by Grant Morrison). These characters have a very trippy relationship which is to be expected from Morrison. Jaleigh Johnson, however, does a wonderful job bringing a reader like me up to speed on them while weaving a very interesting story as well.  Johnson also navigates the complex canvas that is the X-Men world of mutants well, mixing established characters (the three protagonists as well as Cyclops, Emma Frost and others) with her own new creation Avery Torres.

The themes of self, identity and finding one's place resonate in the story, making it a quick and exciting read.  Recommended for Marvel fans, super-hero fans, and just general action fans.

Posted by Martin Maenza at 5:23 PM