Book Review: The Serpent and the Dead 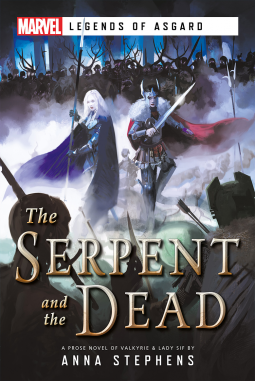 Coming in September from Aconyte Books is The Serpent and the Dead, the latest in the Marvel: Legends of Asgard series, by author Anna Stephens.  I had the pleasure of reading an advanced digital ARC in exchange for an honest review.
This adventure is a high-stakes mission for Lady Sif and Brunnhilde the Valkyrie as they must discover why the souls of fallen warriors are not making their way to Valhalla as they should. Soon, these women find themselves in the midst of intense battles with armies of deadly enemies.
Anna Stephens, an acclaimed British fantasy author, seems right at home with the rich mythology of Asgard and the choreographing of combat sequences throughout the book. She delivers an engaging adventure that shines a spotlight on one of Marvel's lesser known heroines.  I, myself, only had a passing familiarity with Sif - from the few runs of Thor comics I have read and her appearances in recent MCU films and TV shows. As such, I was very eager to learn more about the character - especially as she interacted with other female characters. Thor, of course, makes appearances in the story, but the focus is firmly fixed on the female protagonists of the piece.
Fans of both fantasy and mythology will enjoy this read.

Posted by Martin Maenza at 1:11 PM