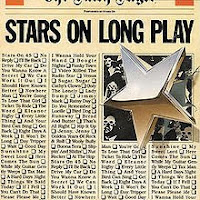 In early 1981, the world was introduced to a Dutch novelty pop act called Stars On 45. The group consisted of session musicians, directed by Golden Earring's Jaap Eggermont, and their style was creating medleys of hit songs with an underlying backbeat. This month marks the thirty-fifth anniversary of the release of their debut album Stars On Long Play which went to number 1 in both Australia and the UK while in the US it spent twenty-four weeks on the Billboard Album chart, peaking at number 9.


Side one consists of a fifteen and a half minute dance track called "Medley", a tribute to the Beatles. It features twenty-eight of their hits as a group.

Side two begins with an extended version of their single "Stars on 45: Medley" which dabbles with tunes from Heatwave, Lipps Inc., the Buggles, Shocking Blue, the Archies, the Everly Brothers, Neil Sedaka, Roy Orbison and more.

The next track is "Do You Remember", a rock 'n roll medley, by Long Tall Ernie and the Shakers. They were a Dutch revival band who were populatr in the 1970's. This track was a hit for them in the Netherlands in 1977.

It closes with "Golden Years of Rock & Roll", also by Long Tall Ernie and the Shakers. This one was a hit in the Netherlands in 1978. Like the previous track, Eggermont was also the producer.

I was a huge Stars On fan, and I owned a copy of this record on vinyl back in the day. I liked the smattering of hits from the 50's, 60's and 70's, all backed by a unifying beat. It was pure sugary fun. I would love to find this one and the follow up two albums digitally some day, but I doubt they were ever released on anything but vinyl and cassette. Consider this one a lost musical treasure.
Posted by Martin Maenza at 4:00 AM