Prince - Parade: Music from the Motion Picture Under the Cherry Moon (30th anniversary) 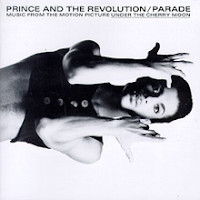 Today (March 31st) marks the thirtieth anniversary of Parade: Music From the Motion Picture Under the Cherry Moon, the eight studio album from Prince. This 1986 release went to number 11 in Canada, number 10 in Norway, number 8 in Australia, number 7 in Austria and New Zealand, number 6 in Germany, number 5 in Sweden, number 4 in the UK, number 3 on the US Billboard Album chart (with a twenty-eight week total on the chart), number 2 in Switzerland and on the US Billboard R&B chart, and number 1 in the Netherlands.

For more from Prince, click here.
Posted by Martin Maenza at 4:00 AM

So glad Parade came out three or four months before Under The Cherry Moon, otherwise I probably would have not grown to enjoy the "soundtrack" so much. The film was hard to watch and I've only seen it once on opening night and again on DVD during a surprise Prince movie marathon my wife thought might be a good idea. (Bless her heart, it wasn't.) On stage, he is very charismatic but very little of that comes across on film - even the Sign O' The Times concert film is somewhat hard to watch though I have no problem listening to it with the picture off.

It was such a great time to be Prince fan in 1982-1987 as Prince recorded so much music. Some of it was even released. <rimshot>

We seem of the same mind of the album and the songs contained within though the closing track guts me too much too consider it a favorite. The opening volley of four tracks, all with a drum running through them is most definitely a favorite. Legend has it that Prince laid down the drum track in one take. The four singles are my favorite tracks from the album and the extended versions and b-sides were just icing on the cake and would defintiely fill out a nice Special Edition of the album along with other unreleased tracks from the sessions.

A high resolution version of Parade appeared on HDTracks in 2013 and has since slid over to Pono Music. While the original album doesn't sound bad by any means but man oh man the super duper huge files ("Kiss" in hi def is roughly the size of the entire album at 320 kbps and the entire HD album is a whopping 1.39GB) sound phenomenal. All the instruments have a crisp clarity to them, especially the drums and horns. And the background vocals also stand out with astonishing sharpness - while listening with headphones, it sounded like they were standing on either side of me on some songs.

The film is a bit tough to watch. I saw it on its original theatre run. It was "different". I do not own the DVD.

I like "Sometimes It Snows in April" because it hits me so hard emotionally. That song always makes me feel, and for that I am very grateful. I have considered adding that to my last requests as a song to be played at my funeral.