Book Review: Welcome to the Game 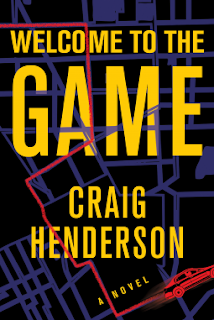 Having moved his family from England to Detroit and opened a foreign car dealership, ex-rally driver Spencer Burham’s life was derailed by the death of his beloved wife. Now disconnected from his young daughter and losing control of the cocktail of drugs and alcohol that gets him through the day, he only just keeps Child Protective Services at bay while his business teeters on the edge of bankruptcy.

Then he has a seemingly chance encounter with a charismatic but lethal gangster, Dominic McGrath. Feeling the squeeze from informants, the rise of tech surveillance, and a hotshot detective who’s made busting him a personal crusade, McGrath’s been planning a last heist that would allow a comfortable retirement, provided he can find a very special type of driver—one who’s capable, trustworthy . . . and naïve.

Welcome to the Game, the debut novel of Craig Henderson, comes out on November 15, 2022. Grove Atlantic provided an early galley for review.

As a Michigan resident since 2014, I am always eager to check out novels set in my new home state and in Detroit in particular. That was the initial draw for me to check this one out. For folks who are into cars, racing, and The Fast and the Furious types of films (I am not any of these), that is another entry level draw to this story.

Henderson is Scottish by birth and has been a presenter on the BBC's "Books That Made Britain" series. He has Master's degrees from the University of Edinburgh. So, he has the credentials. But does he know Detroit? Turns out, he has done his research. Not only does he get locations right, he also has mastered the many streets of downtown Motown (very important for a book that involves fast driving). This is fiction though, and I have to say he gives much more credit to the Detroit Lions capabilities than what we residents see week in and week out. For that optimism, I have to appreciate him.

I found the story to be very engaging, and Henderson's writing to be just the right balance for a story such as this. Some characters garnered more of my interest than others. Many walk the very gray area as far as professionalism and morality are concerned. Like a very high-speed chase, the story zigs and zags quite a bit in the last half dozen chapters or so - at times to the point where I found myself a bit disoriented as well. The violence is appropriate for a story dealing with seamy criminal elements.

Posted by Martin Maenza at 3:57 PM