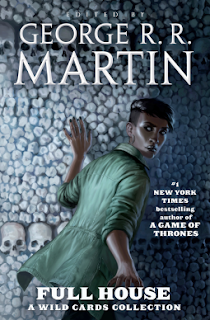 This latest anthology comes out on August 9, 2022. Macmillan-Tor/Forge provided an early galley in exchange for a review.

I was still in college (my final year) when the first Wild Cards book came out in January of 1987. This one told how an alien virus was released over New York City in the late 1940's, changing a world forever. Those exposed either died instantly or had their lives altered drastically. Some suffered hideous deformities - becoming known as Jokers. A small number acquired super-abilities - becoming known as Aces. As a super-hero fanatic, this was right in my wheelhouse. For the next twenty-five years, I would eagerly buy and gobble up the latest paperback in the series as soon as they were released.

From 2013 to 2022, twenty-three standalone stories in the series were published on the Tor website. Full Force includes a large selection (ten) of these stories, for the first time in physical print. A number of the characters in these tales first appeared in some of those earlier published collections published before 2013. Events from those earlier stories do get referenced in these ones as well. So, this is definitely a book for the fans first and foremost. My concern: those diehard fans will likely have already read these stories online so they might only pick this up to be completists. Comic fans are completists by nature, though, so this might not be too big of an issue.

For me, personally, I found that I enjoyed more than half of these tales. For an anthology, that's a good reward.

Posted by Martin Maenza at 8:42 PM