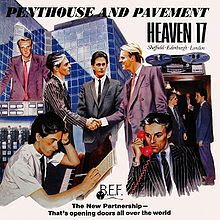 This month marks the thirty-fifth anniversary of Penthouse and Pavement, the debut album from the UK synthpop band Heaven 17. This 1981 record charted at number 99 in Australia, number 45 in New Zealand, number 24 in Sweden and number 14 in the UK. It stayed on the UK charts for seventy-seven weeks and had achieved Gold sales status by October of the following year.


Side one begins with "(We Don't Need This) Fascist Groove Thang". As the debut single, it went to number 72 in Australia and number 45 in the UK. Here in the US, it charted at number 29 on the US Billboard Dance chart. With lyrics that attacked the political actions of Prime Minister Margaret Thatcher and US President Ronald Reagan, the song was quickly banned by the BBC. But with an infectious dance beat, it proved to be very popular nonetheless. The song was a great workout and one I often listened to when getting ready for an evening out.

The title track is next. "Penthouse and Pavement" is another solid dance groove built upon solid synth riffs. As a single it went to number 93 in Australia, number 57 in the UK, number 37 in New Zealand, and number 19 on the US Billboard Dance chart. The lyrics tell of a man caught up in a glamourous high-profile life of crime.

"Play to Win", the second single, reached number 46 in the UK, number 39 in New Zealand, and number 19 on the US Billboard Dance chart. The bass hook on this one is very strong, giving it a very funky sound.

"Soul Warfare" closes out the first side by keeping the beat going. This was the one track I don't believe I had ever hear in the last three and half decades. I rather like it.

Side two opens with the bouncing notes of "Geisha Boys and Temple Girls"; they give the song a very foreign feel. It then dives into a steady, hypnotic dance beat. I always liked listening to this one in my darkened bedroom with headphone on.

"Let's All Make a Bomb" is another politically infused dance jam.

"The Height of the Fighting" charted at number 20 in New Zealand.

Things slow down with "Song with No Name", a track which would later appear on the group's second album The Luxury Gap as well.

The album closes with "We're Going to Live for a Very Long Time". On the original vinyl, the final chorus ran up to and onto the runoff groove. This basically gave a looping effect of the phrase "for a very long time", making the song run indefinitely until the needle was picked up.

While I never owned a copy of this version of the album, I did have most of these songs on the US release Heaven 17 which came out in late 1982. It was from these that I became an instant fan of the band. Listening to the songs in the original order on Spotify was a lot of fun. I might have to pick this one up in its remastered format with many additional remixes and bonus tracks.

For more from Heaven 17, click here.
Posted by Martin Maenza at 3:00 AM

We love H17 'round here! Thanks for making me dig this one out again.

As you mention, "Song With No Name" would appear on The Luxury Gap, but to clarify, that was only on the US release of that album. In any case, why a synth-funk band thinks they need to record ballads is beyond me. Arista sure made a mess out of the H17 releases here in the US, didn't promote them, then probably wondered why the group didn't break out here.

If you want a trip back to 1982, the original US Heaven 17 album is available in its entirety here on the YouTube. Like you, it was my introduction to the band and their music.