ABC - The Lexicon of Love II 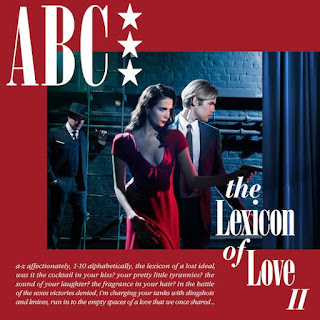 Last week (May 27th) marked the release of The Lexicon of Love II, the ninth studio album from ABC (now consisting of singer/songwriter Martin Fry and orchestrator Anne Dudley). And if the name and album cover design (down to the graphical layout, the use of lyrical poetry beneath the title, etc.) evokes memories of the band's 1982 debut album The Lexicon of Love, then that arrow has not gone wide from the mark.


I had first heard about the coming of The Lexicon of Love II while listening to Sirius XM's 80's on 8. Between songs, original VJ Nina Blackwood dropped the news, and I was immediately excited.

Being of a huge fan of ABC and their debut album, I knew this was a no-brainer for me. During high school and college, the 1982 album was a go-to for me as it helped me navigate the waves of dating. Those songs looked at love and romance through the eyes of a young man (Fry - who is about seven years my senior). I could very much relate.

Fry has said that the new album is a return to those themes, now viewed by the experienced lens of man in his late 50's. He has lived, he has loved, and the songs are meant to reflect that. By working with Dudley again, who did the string arrangements on the original album, everything comes full circle.

The record opens with idealist overture of "The Flames of Desire" and then shifts into an up-tempo melody. The lyrics tell of a man who is consumed with what he views as an epic love affair, one for the ages. I like the song's energy which is a good way to open a record.

"Viva Love" was released as the first single in April, as a taste of what was to come. When I first heard this one a few months ago, I could tell Fry was hitting on all cylinders with a song that took me back. It has a retro vibe to it while still sounding fresh at the same time. I suspect this one is becoming very popular in the dance clubs across Europe.

After two fast numbers, we slow down a bit with "Ten Below Zero". In contrast to the heat of the opening track, this one focuses on a love that has grown cold. Like with so many ABC songs, I really appreciate the lyrical wordplay on this one.

The mid-tempo "Confessions of a Fool" reflects upon a man's past mistakes when it comes to the affairs of the heart.

Backed by a bouncing beat, "Singer Not the Song" seems like a very personal tune as its subject matter is right in Fry's occupational circle. When the sounds of the audience fade, it ends with a single, lonely bass cello. That's a nice touch.

"The Ship of the Seasick Sailor" carries the pleas of a man who wants his former love to take him back. He suggests that maybe she could love him again. I have to admit that this one hasn't clicked with me immediately (unlike the proceeding tracks did), but I am hopeful it will upon repeated listens to the album.

I like that "Kiss Me Goodbye" opens simply with Fry's vocals and a subtle backing accompaniment. The track builds with each additional verse and chorus. I appreciate the lyrical nod near the end to 1982's "Poison Arrow".

"I Believe in Love" changes things up a bit with a guitar-centric base melody throughout. For me, it helps the song to stand out a bit at this point on an album (what I like to refer to as the "backside" which is when the listener might feel they are getting more of the same).

"The Love Inside the Love", with its slowly spiraling orchestration, peels back the layers of love, exposing the deeper feelings that develop over time. As the bridging verse tells symbolically, this is a long journey from initial desire and infatuation.

"Brighter Than the Sun" gives us one more bouncing beat as the singer seeks direction for the future. It serves as a nice epilogue to this chapter of the lexicon and a possible prologue to the next one.

The album the ends with the less than a minute long instrumental "Viva Love Reprise".

All in all, The Lexicon of Love II met any expectations I had for it. Martin Fry delivers exactly the kind of performance I've come to appreciate from him over these past three and half decades. The arrangements laid out with Anne Dudley are a perfect match and give these songs emotional resonance. I think this will be one I come back to a lot over the rest of my lifetime.

For more from ABC, click here.
Posted by Martin Maenza at 3:00 AM

"Viva Love", the initial single, was on Spotify that very same day so I gave it a listen. Or two. Or six. I was excited for about five or six days (I think we even shared an email about it) and then two of the biggest people in my life died a day apart from one another and any anticipation I had for the album took a seat way in the back of the priority bus to what was currently going on in my life.

But I had set a reminder for a week prior to the album's release on May 27th and it got me a little excited again. I pulled up "Viva Love" and spent some time that week going through ABC's back catalogue of hits and misses. I discovered that "Viva Love" existed previously in a remixed version by Brothers In Rhythm that was included as download only bonus track material from 2005's Abracadabra. Though the older version was a remix and very House in style, it was unmistakably the same song. I listened to The Lexicon Of Love II as a whole twice through that Friday night and thought it sounded a little like some of the songs on The Lexicon of Love though Fry's voice was obviously not as nimble as it once was and the vibe was much more low key and chill with lots of ballads - there was no funk to be found and funk was a key ingredient on the 1982 album.

I listened a few more times to LoLII but each time it just made me want to hear the original. Is it lush? Yes. Are Fry's lyrics on point? Sometimes. The new album is missing the funk and let's face it, Trevor Horn, so I cannot recommend it. Glad you liked it though. The majority of the reviews I have read seem to agree with you.