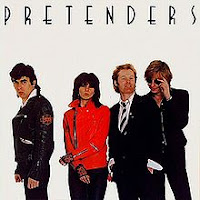 Today (January 19th) marks the thirty fifth anniversary of the 1980 self-titled debut album from the British new-wave band the Pretenders. The record went to number 24 in Norway, number 14 in the Netherlands, number 9 on the US Billboard Album chart (it has a seventy-eight week total run on the chart), number 2 in New Zealand and Sweden, and number 1 in the UK.

For my full review, click here.
Posted by Martin Maenza at 5:00 PM