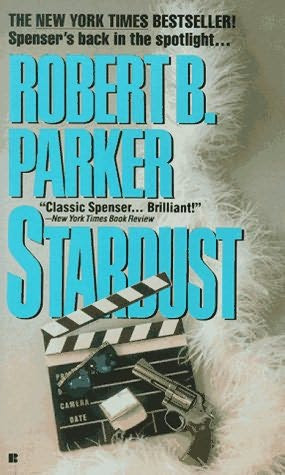 Last night I finished up the seventeenth book in Robert B. Parker's Spenser series. Written in 1990, Stardust has the Boston private detective hired by a Hollywood studio that shoots a show in Boston. It seems their star Jill Joyce has been receiving harrassing phone calls and threats from an unknown source. Spenser is hired to protect her. This turns out to be much more difficult than it sounds, especially when the stakes jump up with a murder on the set.

What I enjoyed about this book is that Parker spends a lot of energy to flesh out even the most minor of characters. From a small town police chief and some folks who are down-trodden to a local rich man and a California drug lord, he does a great job creating some new characters for whom Spenser interacts.

And then there is Jill Joyce herself. An awesome job by Parker to create a character readers will love to hate. She is so tightly-wound and frustrating that the reader wants to strangle her sometimes. In the end, though, you do care about her and what happens to her. I have a feeling she'll pop up again - as often characters from previous Spenser books do.
Posted by Martin Maenza at 7:43 AM