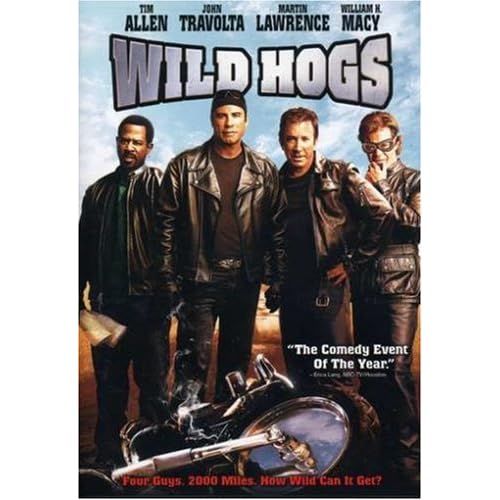 Given the all-star line up, I expected 2007's Wild Hogs to be pretty funny. You've got Tim Allen and John Travolta, both who I enjoyed a lot in TV and film over the years. You also have Martin Lawrence and the always superb William H. Macy. These actors play four middle-aged suburban men in Cincinnati who, frustrated with the pace of daily life, decide to embark on a road-trip to the Pacific coast on their motorcycles. The film also stars Ray Liotta and academy-award winner Marisa Tomei as well as a cameo by that original road-warrior Peter Fonda.

I watched the film over the weekend on cable and have to say it was just okay. The story was fairly predictable and the comedy was slapstick at best. Travolta's character came across very whiny. Allen's character came across as a bit bland. Lawrence played his usual role as expected. The Macy character was played very well, as expected, and really lit up when Tomei enters the film. Liotta seemed very over the top.

The soundtrack rocked well though - I loved the use of the classic road-trip rock songs you'd expect in a film about motorcycling. And on HD, the scenic shots of the cross country ride looked nice too. The ending seemed a bit contrived and forced - sort of one of those where the writers get the characters painted into a corner and then say "now, how do we end this?" (it is a regular comedy - as opposed to a dark comedy - after all so it had to end positively).

This is one of those films I was glad I didn't spend money to see it in the theatres or to rent it. It was worth a one time viewing but that's about all.
Posted by Martin Maenza at 7:54 PM