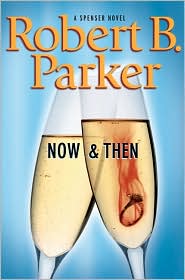 Finally, I've finished the 35th Spenser novel - the most recent release from 2007 - by Robert B. Parker called Now And Then. It starts out as a case of a husband hiring the Boston private eye to find out if his wife is cheating on him. Turns out she is - with a man who has some counter-culture ties. The husband is with the FBI, and when the man confronts the woman, both end up dead. Rather than leave the case alone or turning it over to his FBI contact, Spenser decides this is something he needs to solve.

But it more than just two dead bodies here. It reminds Spenser of a difficult time in his past when he and Susan were going through a seperation and another bad man was involved. In solving this case, Spenser believes he can ease any unsettled feelings from his own past. So, the case really takes on a personal feel to it.

I must say that I am glad to be finished with Spenser (for now, until the next book comes out late this year - and then I will only have to visit once a year to stay current). Truth is, I'm sort of burned out on Parker's law-into-his-own-hands character. Don't get me wrong - over all I've enjoyed the books in the series more often than not. I just don't think they were written to be read back to back to back like I did it. I think it exposes a lot of the flaws in the books doing it that way.

I'm ready to cleanse my pallette a bit with some non-fiction first and then on to a different author and genre.
Posted by Martin Maenza at 10:25 PM

Email ThisBlogThis!Share to TwitterShare to FacebookShare to Pinterest
Labels: books, Now And Then, Robert B. Parker, Spenser

I discovered the Spenser books when I was in 9th grade. In many ways they introduced me to words and situations that were new to me at that time. You might want to try some of Parker's Sunny Randall
books. Although she was created with actress Helen Hunt in mind for a potential film, she basically is Spenser in a skirt.

Thanks for the heads up. I was planning on doing the Sunny Randall books after my little hiatus.