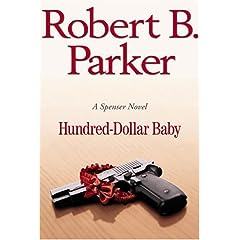 In the 9th Spenser novel Ceremony, Robert B. Parker introduced the character of April Kyle - a runaway out turning tricks. The Boston private eye rescued her from a bad situation and set her up with a New York madame. In the 13th novel Taming A Sea-Horse, Spenser found his path crossing with April again. He thought then he had gotten her on the right path.

Here in the 34th Spenser novel Hundred-Dollar Baby written in 2006, April is back again. She seems more mature, sophisticated, even running her own business but the fruit hasn't gotten far from the tree. She's still in the business of prostitution, but she wants to run it from a woman's angle. And the problem is men are causing her problems. She goes to see Spenser to help, and he feels obligated to help save her again. What he doesn't realize is how intricate the web of lies and trouble has become. Can he untangle it?

My problem with this book are two-fold. One, I don't find April a very sympathetic character. As a reader, I don't care about her. Two, the ending seemed rather forced as if Parker was realizing he was hitting his usual page length for novels and that he needed a quick conclusion. It could have been fleshed out more. Drop a couple of those two to three page chapters with Spenser missing Susan and there you go - space to finish the book right.
Posted by Martin Maenza at 5:22 PM