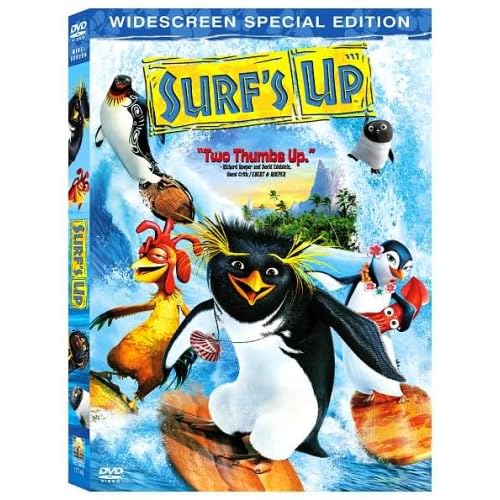 Another Saturday night in our household and that means pulling up another film recorded on the DVR earlier in the week. This time we viewed the 2007 computer animated Surf's Up, another film from last year that we hadn't gotten around to seeing in theatres. It is the story of Cody (voiced by Shia LeBauf), a penguin from Antartica, that dreams of being a big winner like his hero Z. He travels to a tropical spot for a big surfing tournament and befriends Chicken Joe (voiced by John Heder). Along the way, he learns the truth about what happened to Z (voiced by Jeff Bridges). James Woods also voices one of the characters.

It was an entertaining enough film, certainly family friendly with a PG rating and only a few potty humor references to earn that. Seeing on the HD widescreen was sufficient - I don't think I would have enjoyed it as much in the theatres. The soundtrack was pretty rocking though all in all (went well with the film). The documentary approach to the story worked well enough too, especially when they included the "older" clips that had that old-time newsreel feel to them. Nice touch.
Posted by Martin Maenza at 9:10 PM

Email ThisBlogThis!Share to TwitterShare to FacebookShare to Pinterest
Labels: films, Surf's Up