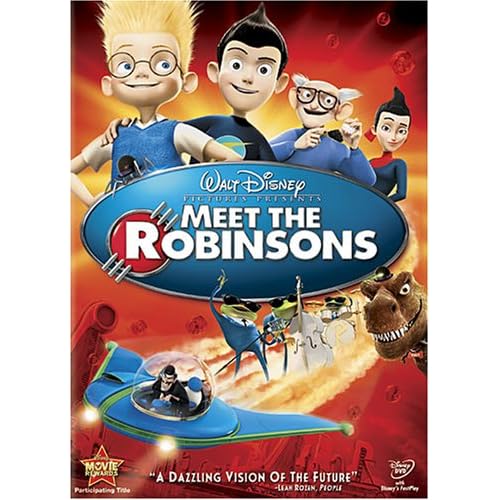 Last night we had family movie night at our house (my wife, my 12 year old son, and I) and I pulled up one of the films recorded on the DVR - 2007's Meet The Robinsons. This Disney computer-animated film is the story of Lewis, an orphan boy with big dreams but not a lot of success. He wants to build a memory-stimulator so he can remember his mother who left him at the orphanage when he was just an infant. But before he can show off his invention at a science fair, a man with a bowler hat tries to steal it and Lewis is helped by an odd boy who claims to be from the future. Turns out, he is!

The story is a lot of fun and good, family entertainment. This just goes to show that G-rated films can exist in today's society and still be worth the price of admission. We laughed, we cheered, and the film even had some tug-at-the-heartstrings moments too. Wonderful film.

If you haven't seen it yet, rent it or catch it on cable. Even without seeing in in 3-D (which is how it was released in theatres - I bet that made it even more fun!), the film works wonderfully.
Posted by Martin Maenza at 8:25 AM

Email ThisBlogThis!Share to TwitterShare to FacebookShare to Pinterest
Labels: films, Meet The Robinsons

Yep - awesome effects in the theaters.... pretty cool movie, too. Shame it somehow got "lost" in the shuffle, I thought it was really good.