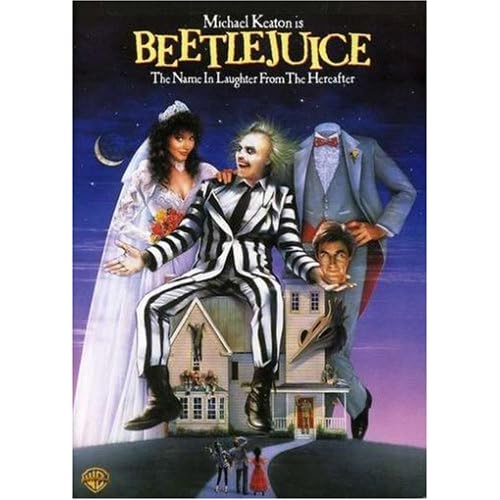 Tuesday night I was flipping around for something to watch and came across Beetlejuice on Universal HD. This comedy with special effects was directed by Tim Burton and starred (a very young) Alec Baldwin, Geena Davis, Winona Ryder, Catherine O'Hara, Jeffrey Jones, and Michael Keaton. Baldwin and Davis play the Maitlands, a happy couple whose life turns for the worse when they end up dead and their spirits are unable to leave their ideal home. That would be fine until the Deetz family (Jones and O'Hara) buy the place and begin major remodeling. Lydia Deetz (Ryder), a strange girl herself, can actually see the ghostly Maitlands. Unable to drive the family from their home, the haunted couple enlist the aid of a trouble-some spook named Betelguese (Keaton) to help them out. Chaos ensues.

Now, I know this film has been around for 20 years but must admit that this was the very first time I've seen the entire film (I've seen a scene here and there on places but not the whole thing). I am however much more familiar with the animated cartoon based on the film that came out a couple years later (I used to watch that a lot even before I had a child). For me, the film was okay - not spectacular as I had assumed. From what I understand, Burton was going for a "B movie" feel with the effects, sort of a quirky, off-the-wall, what-the-heck sort of reaction. At least that's what I got from it. A lot of it just seemed so out there. The directing was very much to Burton's style - it brought back memories of Edward Scissorhands and The Nightmare Before Christmas, both later works by him.

With this cast, I expected a bit more. Keaton seemed more hammy than funny, more creepy pervert than off-the-wall troublemaker. O'Hara played a shrew well enough - if I was to hate her character, it worked. Davis and Baldwin were okay but aimless - their characters were more enjoyable when they were alive. Only Ryder pulled off that neo-Goth role well enough.

I have to say that I liked the cartoon series better. I think the outlandish aspects of Beetlejuice's world worked better in full animation.
Posted by Martin Maenza at 7:57 PM