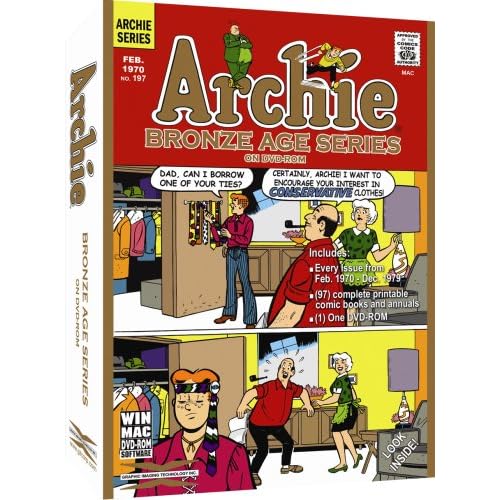 After Marvel pulled the plug on GIT Corp's production of their DVD-ROM sets (see this blog entry I posted previously), I was worried that was that for my comics on DVD-ROM reading. Thankfully, GIT went and got a new publisher on board.

GIT put out last month the first installment of the Archie line of titles on DVD-ROM with Archie the Bronze Age Collection. This set features 97 complete printable comics and annuals from the Archie title that ran from February 1970 through December 1979.

As a kid, I did read some Archie books with Jeannie, a neighbor girl across the street. This was back when I was reading books by Gold Key and Harvey as well, before I graduated to the world of super-heroes. So, reading this set takes me back to those times when we couldn't wait to grow up to become teenagers and have cool adventures like Archie and gang.

A few differences with this set over GIT's Marvel offerings:

First, it is only one decade of a book - the 1970's. So you get less books that Marvel's run of a full title. That means we are starting with issue 197 in the run too. So, we aren't getting the full range of stories. But that's okay. The price is less than the Marvel sets (under $20) so it makes it affordable to the casual buyer. If it sells well, I'd expect we'll see sets with earlier stuff and later stuff as well.

Conversely, unlike the Marvel stuff which builds on continuity, each of these issues can be read on their own. So, starting in the middle of the run is fine. Again, Archie and his pals are ageless - forever teens - so the only thing that changes with the decades are the clothes, the cars and the music. So, this 70's snapshot works out just fine.

Already on the slate for the coming months are bronze age sets for Jughead (in August) and Betty and Veronica (in September). I look forward to sampling those as well.
Posted by Martin Maenza at 5:53 AM