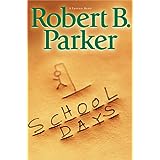 School Days, published in 2005, is Robert B. Parker's 33rd Spenser novel. The Boston investigator is hired by a grandmother of a young man involved in a school shooting. She wants Spenser to prove his innocence, even though the child confessed to being a part of the killing with another young man. In typical fashion of these novels by Parker, Spenser learns there is more to the case than meets the eye.

The book is pure Spenser. The typical supporting cast of Susan and Hawk are not present. Only minor contacts of Spenser's from past books appear. This, in a lot of ways, is sort of a throwback to the earlier novels. In that, it makes it a nice break from the last few books.

In a number of ways, this one seemed to be ripped from the headlines. He had a very Columbine feel to it, as the infamous school shooting had happened around the time this book was written.
Posted by Martin Maenza at 5:49 AM