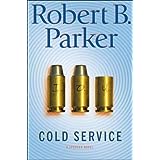 I just finished reading Cold Service, the 32nd book by Robert B. Parker in the Spenser series. In this 2005 novel, we open with Spenser at Hawk's bedside in a hospital. Hawk and a family he knew were gunned down by five Ukranian thugs. Only Hawk survived the shooting which left one little boy orphaned. Even beat down pretty bad, Spenser's good friend wants revenge for the family and for himself. It takes awhile to recover, but eventually he is ready to do just that. But what it ends up costing Hawk is something else.

I really felt Parker missed an opportunity here. The book focuses on Hawk mostly and, I have to say, it was about time. However, this was a chance to really let readers know more details about who Hawk is, how he came to be, etc. We don't get that. Parker keeps him this man of mystery and secrets. I felt he could have given the readers more without compromising the character. Ah well.
Posted by Martin Maenza at 6:08 PM