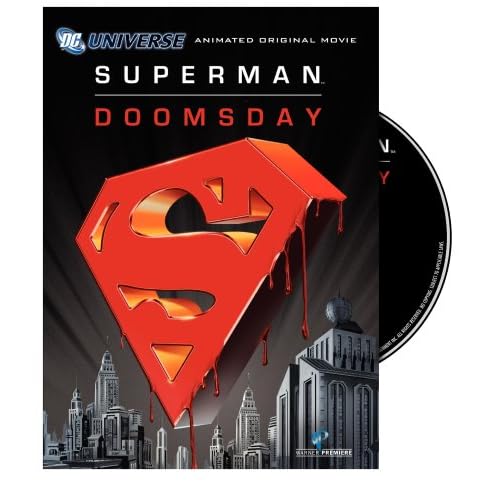 Cartoon Network showed the 2007 direct to video animated Superman Doomsday this weekend. I taped it, watched it with my son on Sunday and have to day that I was not very impressed. I am glad I didn't buy this one on DVD sight unseen.

The story tries in about 70 minutes to cover what was done in a year's worth of comic stores back in the early part of the decade - ie. the death and rebirth of Superman. In both tales, the Man of Steel faces an incredible alien fighting machine (a creature called Doomsday) that only knows how to do one thing - kill. And the first part of the film covers this aspect of the tale well enough. Superman fights the creature to his death. The film even then covers, quickly, the aspects of the comic series covered over two months in an arc "Funeral For a Friend". Now, this animated film does not have space for other heroes to cameo, so we only see Metropolis' response to his death. Still works.

But then the film goes off on its own story path. In the comics, four heroes emerge to try to fill the void left by Superman. They are Steel, Superboy, the Cyborg-Superman and the Eradicator. The film has no time for all these extra characters, so it comes up with its own plot.

And that's kind of where the film loses me. I realize they had to do something quick to bring it all back around, but it all felt like two episodes from the old animated series, put together. Ah well.
Posted by Martin Maenza at 5:53 AM

I remember when this came out, that it didn't get many good reviews - mainly because it tried to take a big, big story and cram it onto a DVD. I did catch some of it on Cartoon, but only on commercial breaks for the show I was watching, so I can't speak for the overall story.

However, given that I kept going back to my original show, instead of watching it, I'd say that says volumes.