Hot Chocolate - Going Through the Motions 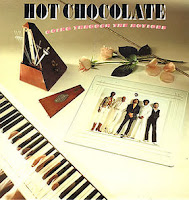 Welcome to another edition of Seventies Saturday. Today (April 6th) we want to wish a very happy sixty-sixth birthday to Tony Connor, the drummer for the UK R&B band Hot Chocolate.

In 1979, the group released Going Through the Motions, their fifth studio album. It charted at number 112 on the US Billboard Hot 200. The line-up at the time included Errol Brown (vocals), Connor (drums), Larry Ferguson (keyboards), Harvey Hensley (guitar), and Pat Olive (congas and bass).


Side one opens with the title track. “Going Through the Motions” was released as the second single; it peaked at number 53 in the UK and on the US Billboard Hot 100, number 49 in the Netherlands and number 33 in New Zealand. Set to a mid-tempo dance beat is this observation that the woman in the relationship has lost interest in her former love.

“I Just Love What You’re Doing” goes for a more positive spin across the floor. The chorus harmonies are done in falsetto and there are some strong horns here as well.

Things slow down a bit with “Dreaming of You”, a sultry ballad with synthesizer overtones and more falsetto vocals through out.

The first half closes with “Dance (Get Down to It)”, a bouncy number naturally made for boogieing.

Side two begins with “Mindless Boogie”. As the first single, it charted at number 46 in the Netherlands and the UK and number 21 in Ireland. The album cut of this social commentary on violence and death is nearly nine minutes in length, giving the listeners plenty of room to lose themselves in the groove. I really like the hooks to this one.

“Night Ride”, a tight and tense track about sexual attraction, features more smooth synths. There is an interesting dichotomy going with the “faster faster” line paired with the drawn out “slow down” response each time; it definitely mirrors the human emotions involved.

The album closes out with “Congas Man”, an ode to the rhythmic drummer that drives us to dance. Olive is, of course, spotlighted on this track.

As a disco lover from the late 1970’s, this album from Hot Chocolate falls right into that wheel-house; they are definitely a group I want to hear more from beyond their known hits from the mid-70‘s. The tracks on Going Through the Motions have great beats and would easily fit into most deejays’ arsenals of music.